Review: To Defeat America Militarily, What Would China Need? 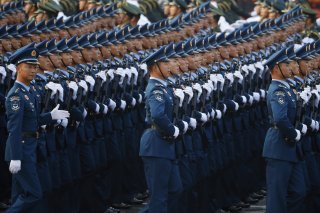 "China seeks to construct a class of amphibious assault ships larger than the YUZHAO class that would include a flight deck for conducting helicopter operations. China may produce four to six of these Type 081 ships with the capacity to transport 500 troops and configured for helicopter-based vertical assault," the report says. Some observers have raised the question as to whether this new class of Chinese amphibs could rival the US Navy's emerging, high-tech America-Class amphibious assault ships.

Some members of Congress, including the former House Armed Services Committee's Seapower and Projection Forces Subcommittee Chairman Rep. Randy Forbes, R-Va., advocated for both a larger U.S. Navy and a stronger U.S. posture toward China's behavior in the region.

The 2014 U.S.-China Economic and Security Review Commission recommended that Congress appoint an outside panel of experts to assess the U.S.-Chinese military balance and make recommendations regarding U.S. military plans and budgets, among other things.Despite being released in 2014, the findings of the report - if slightly dated - offer a detailed and insightful window into Chinese Air Force technology, progress and development.

The review states that the Chines People’s Liberation Army currently has approximately 2,200 operational aircraft, nearly 600 of which are considered modern.

Regarding stealth aircraft, the review mentions the recent flights of prototypes of the Chinese J-20 stealth fighter, calling the aircraft more advanced than any other air platform currently deployed in the Asia-Pacific region.  The Chinese are also testing a smaller stealth fighter variant called the J-31 although its intended use is unclear, according to the report.

In 2014, China displayed the Shenyang J-31 stealth fighter at China’s Zuhai Air show, according to various reports. However, several analysts have made the point that it is not at all clear if the platform comes close to rivaling the technological capability of the U.S. F-35.

Nevertheless, the U.S. technological advantage in weaponry, air and naval platforms is rapidly decreasing, according to the review.

To illustrate this point, the review cites comments from an analyst who compared U.S.-Chinese fighter jets to one another roughly twenty years ago versus a similar comparison today.

Alongside their J-10 and J-11 fighters, the Chinese also own Russian-built Su-27s and Su-30s and are on the verge of buying the new Su-35 from Russia, the review states.

The review also points to the Y-20 aircraft, a new strategic airlifter now being tested by the Chinese which has three times the cargo-carrying capacity of the U.S. Air Force’s C-130.  Some of these new planes could be configured into tanker aircraft, allowing the Chinese to massively increase their reach and ability to project air power over longer distances.

The review also cites Russian media reports claiming that Russia has approved the sale of its new, next-generation S-400 surface-to-air-missile to China.

“Such a sale has been under negotiation since at least 2012. The S–400 would more than double the range of China’s air defenses from approximately 125 to 250 miles—enough to cover all of Taiwan, the Senkaku Islands, and parts of the South China Sea,” the review says.

The review also catalogues information related to China’s nuclear arsenal and long-range intercontinental ballistic missiles such as the existing DF-31 and DF-31A along with the now-in-development DF-41.

The Chinese are believed to already have a number of road-mobile ICBMs able to carry nuclear weapons. The DF-41 is reported to have as many as 10 re-entry vehicles, analysts have said.