This Rifle Was Designed for Extremely Violent Engagements 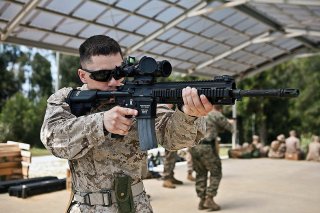 Here’​s What You Need to Remember: “America! Ahhhhh!” roars Chief Warrant Officer Christian Wade as he unloads with the M27 Infantry Automatic Rifle — and not with any of that wimpy “pew, pew, pew” slow and steady squeeze stuff. The 2nd Marine Division gunner goes full auto in his latest fact or fiction video, before pausing to ask: “Is that really necessary?”

From 5, 30, and 80 meters, Wade and Cpl. Gerald Trado, an infantryman with 3rd Battalion, 6th Marines, take turns sending rounds downrange in semi-automatic and fully automatic. In terms of accuracy, the results are mixed.

While shooting on automatic at the closest distance, the vast majority of rounds fired hit right on target, but as the Marines move further away, their shot placements start to veer off. By the time they’re at 80 meters, just the first two or three rounds are landing center mass, with the remainder trailing up and to the left. As for what Wade calls “aggressive semi-automatic” fire? Well, there are fewer rounds but all are either dead center or in the T-box, which is what you expect when you have two infantry Marines on the range.