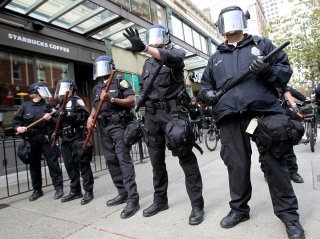 It is hard to tell what the current revolutionary violence in our major cities is all about.

So far, hundreds of police have been injured, dozens of people have been killed, and we have seen billions of dollars in property and collateral damage.

Ostensibly, many of the summer demonstrations were in protest over the gruesome detention and death of George Floyd while in Minneapolis police custody on May 25.

Yet three months later, few of those trying to burn down a Portland police precinct—with police barricaded inside—or looting the high-end boutiques of Chicago’s Magnificent Mile, or indiscriminately beating up innocent pedestrians, appear to be driven by Floyd’s death.

Apologists argue that the perfect-storm furor of June, July, and August was the dividend of a collective six-month fear over the COVID-19 pandemic that has, as of this writing, killed nearly 180,000 Americans.

The unprecedented national quarantine and the sudden, self-generated recession of a once-booming economy certainly added to the tensions.

Millions of youths were sequestered in their apartments and basements, unemployed, without school, and worried over their career prospects. Many simply wanted to vent their rage at the world and almost everything in it.

The media romanticized the “summer of love” unrest and downplayed the violence. Newspapers ran bizarre photo essays on the chic garb at the protests—umbrellas, leaf blowers, wooden shields, armor, and colored bike helmets.

Many in the street seemed as interested in taking selfies as they were in smashing windows.

Some cite furor directed at President Donald Trump, the tensions of an election year, and the weaponization of almost every current issue by both political parties.

Still others claim the violence is mostly careerist-driven. Demands are made to fire ideological enemies and hire partisan friends. If the old guard is banished, then their lucrative billets can be snapped up by a new woke generation. Demagogues see political careers birthed with the bullhorn.

None of these explanations are mutually exclusive. But all reflect confusion over why often senseless vandalism has been directed at statues of Ulysses S. Grant and Frederick Douglass, and at the World War II Memorial.

Why do liberal authors and artists fear there is a new McCarthyite cancel culture that threatens to take out even progressive sympathizers?

Why do city governments defund police departments at the very moment vulnerable residents are most fearful for their safety?

Note that there are rarely demands from Antifa for new statues, given that the protesters’ own heroes are often more flawed than the historical figures whose statues they deface and destroy.

What, then, is going on?

As with most cultural revolutions that wish to start things over at “year zero,” the violence is aimed at America’s past in order to change its present and future.

The targets are not just the old majority culture but also classical statues and buildings, hallowed institutions, religious icons, the renowned names of streets and plazas, and almost every representation of tradition and authority.

For the majority of Americans who do not buy into the revolution, it all seems so surreal—and hypocritical.

Only a despised, dynamic American economy allows millions to divorce from it for a summer of protest.

A ridiculed U.S. Constitution ensures that looters and arsonists have due process.

Affirmative action; federally ensured and subsidized college grants and loans; and cheap smartphones, headphones, and laptops all give youth choices unimagined in the past.

No matter—cultural revolutions are incoherent and nihilist.

Those who signed up for the Jacobin Reign of Terror wanted violence, not a constitutional republic to replace the French monarchy.

The Bolsheviks were less interested in substituting an elected prime minister for the Russian czar than in grabbing power and murdering millions of their enemies.

Mao Zedong did not just hate the warlords, landlords, Mandarins, and Nationalists. He wished to reinvent 1 billion Chinese in his own narcissistic image by first killing millions.

There is, of course, reason to oversee the police more effectively.

Universities are partly culpable for a collective $1.4 trillion in student loan debt.

But these are not the apparent concerns of those who carry off shoes and phones in U-Hauls, kick the unconscious on the pavement, destroy art and sculpture, or seek to torch public buildings with public servants inside.

The point of the mob is to wipe out what it cannot create.

It topples what it can neither match nor even comprehend.

It would erode the very system that ensures it singular freedom, leisure, and historic affluence.

The brand of the anarchist is not logic but envy-driven power: to take it, to keep it, and to use it against purported enemies—which would otherwise be impossible in times of calm or through the ballot box.

This article by Victor Davis Hanson originally appeared at The Daily Signal. This article first appeared in 2020.