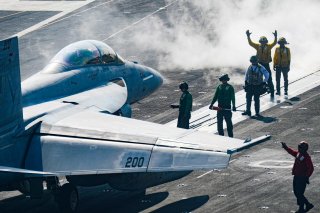 Key Point: They might be more vulnerable, but they're still platforms for strike groups, potential vessels for disaster relief, and symbols of American power.

"The nuclear-powered ones can even power a small city if needed to, and instead of fighter aircraft the flight deck can be equipped with helicopters and unmanned aerial vehicles to provide disaster relief," Curran told The National Interest. "The carriers also have extensive hospitals and can transport U.S. Marines to provide security. These ships can be stocked with tons and tons of food, water and medicine and almost anything else that needs to be transported."

"These are ideal for helping after a natural disaster," explained Mike Fabey, Americas Naval reporter for Jane's.

However, in addition to being able to perform as a forward base of operations today, the carrier remains that ultimate show of strength. Throughout the latter half of the 20th century the United States was the only power that could deploy carriers around the world.