The Rise of China Vindicates MacArthur 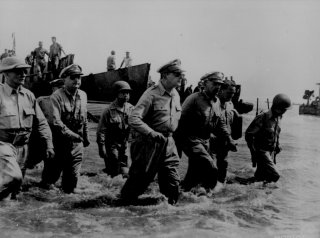 In the midst of President Harry Truman’s controversial firing of General Douglas MacArthur during the Korean War, Air Force General George Kenny, who brilliantly led MacArthur’s air force in the Southwest Pacific in World War II, wrote that when the histories of the Korean War are written, they will "add still more to the luster of MacArthur's reputation as a military leader." General Kenny was wrong about historians, who have largely taken Truman’s side in the debate over how to deal with China’s entry into the war. But in a larger geopolitical sense, General Kenny was right. China’s rise in the 21st century and its challenge to America’s global preeminence have vindicated MacArthur.

Truman’s partisans have long portrayed MacArthur’s conduct during the Korean War as reckless, dangerous, and likely to lead to World War III. They have blamed MacArthur for attempting to liberate North Korea from communist rule, even though that was the initial policy of the Truman administration and the United Nations. They have blamed MacArthur for sending forces under his command to the Yalu River, even though MacArthur was told by General George Marshall to “feel unhampered strategically and tactically to proceed north of the 38th Parallel." They claimed that MacArthur's reckless advance into North Korea provoked China to enter the war in October-November 1950, even though China had decided to massively enter the war as early as July 1950, long before Inchon and long before MacArthur’s forces crossed into North Korea. They have blamed MacArthur for suggesting that Nationalist forces on Taiwan be used to help defeat the Communist Chinese army, even though Mao Zedong’s planned invasion of Taiwan was only forestalled by America’s entry into the war and dispatch of warships to the Taiwan Strait. They have blamed MacArthur for suggesting the use of nuclear weapons against China, even though both Presidents Truman and Eisenhower threatened their use, and the Joint Chiefs of Staff ordered unassembled atomic bombs to Guam in case their use was authorized. And they have blamed MacArthur for wanting to win the war instead of settling for stalemate, claiming, in the words of General Omar Bradley, that Korea was the wrong war, in the wrong place, at the wrong time, even though that stalemate has produced 70 years of misery and horrors for the North Korean and Chinese people, led to our disastrous defeat in Vietnam, and enabled China to consolidate its political hold on the mainland and develop into a most dangerous peer competitor of the United States.

With the benefit of hindsight, we can look back across the past 70 years and see Communist China develop into a first-rate power that threatens—with its increasingly powerful navy, its growing and more sophisticated army, and its global geopolitical vision known as the Belt and Road Initiative—hegemony on the Eurasian landmass. MacArthur, to his credit, sensed this 70 years ago. China, under Mao's regime, he wrote in a memorandum to George Marshall in November 1950, is manifesting "increasingly dominant aggressive tendencies,” leading to the creation “of a new and dominant power in Asia.” The Chinese Communist Party, he continued, is “aggressively imperialistic with a lust for expansion and increased power.” “When [the Chinese] reach fructification of their military potential,” MacArthur warned, “I dread to think what may happen.”

Truman and his top advisers were Eurocentric in their approach to international politics. They understandably and perhaps correctly perceived the principal immediate threat to U.S. security as emanating from Europe. This may explain, in part, Truman’s disastrous policies in Asia beginning with his abandonment of the Chinese Nationalists during China’s civil war and culminating in the Korean War stalemate. MacArthur’s geopolitical view was more comprehensive, more global. He sensed that the future pivot of world politics was in the Asia-Pacific, not Europe—and he was right.

In his famous address to Congress after his firing and return to America, MacArthur explained that America’s victory in the Pacific shifted our strategic frontier to embrace the entire Pacific Ocean. “We control it,” he said "… by a chain of islands extending in an arc from the Aleutians to the Marianas." From that island chain, he continued, “we can dominate with sea and air power every Asiatic port from Vladivostok to Singapore and prevent any hostile movement into the Pacific.” If the U.S. maintained “naval and air supremacy and modest ground elements to defend bases,” he further explained, “any major attack from continental Asia toward us or our friends of the Pacific would be doomed to failure.” To hold this “littoral defense line in the western Pacific,” MacArthur continued, we must hold “all segments thereof.” Any major breach of the island chain, such as the loss of Taiwan, he believed, would doom our position in the Pacific.

As if to emphasize his dispute with Truman and his Eurocentric advisers, MacArthur suggested that “[t]he first line of freedom’s defense is not the Elbe, not the Rhine, but it is in Korea on the Yalu.” This is why today, we continue to defend South Korea and resist China’s encroachments in the South China Sea. This is why, today, the United States has pivoted to the Asia-Pacific. This is why top Trump administration officials in a widely publicized series of speeches have recently signaled that China poses a potentially existential threat to the United States.

In the infamous letter to Rep. Joseph Martin that triggered his being relieved of command in Korea—the letter where he proclaimed, “There is no substitute for victory”—MacArthur wrote, “here in Asia is where the Communist conspirators have elected to make their play for global conquest.” America’s greatest general of the 20th century foresaw the 21st century world.

Francis P. Sempa is the author of Geopolitics: From the Cold War to the 21st Century, America’s Global Role: Essays and Reviews on National Security, Geopolitics and War, and Somewhere in France, Somewhere in Germany: A Combat Soldier’s Journey through the Second World War. He has written lengthy introductions to two of Mahan’s books, and has written on historical and foreign policy topics for The Diplomat, the University Bookman, Joint Force Quarterly, the Asian Review of Books, the New York Journal of Books, the Claremont Review of Books, American Diplomacy, the Washington Times, and other publications. He is an attorney, an adjunct professor of political science at Wilkes University, and a contributing editor to American Diplomacy.

This article was first published in RealClearDefense.