Risky Business: The Soviet Union Almost Sold a Submarine to a Drug Cartel 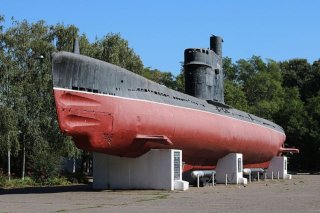 In 2019, footage of a U.S. Coast Guard interdiction of a homemade drug smuggling submarine took the world by storm, and for good reason. As we watched one of the baddest dudes we’re ever apt to see anywhere outside of a movie pounding on the hatch of the mostly submerged sub, many of us were shocked to learn that drug cartels actually have their own submarines.

What may surprise you more is that these amateur submarines were really a consolation prize for drug smugglers out of Colombia. Their first choice? An actual Soviet Foxtrot-class submarine. What’s even crazier, however, is that the Russians seemed to be more than happy to sell them one.

The Soviet legacy of desperation

The Cold War that erupted between the United States and Soviet Union immediately after World War II came to an end prompted a massive build-up of military hardware in both nations. The Soviets, championing their communist political and economic model, secured a number of early PR victories over the capitalist U.S., being the first nation to send a satellite, a dog, and a person into earth’s orbit. This early lead created what some have taken to calling the “Sputnik Crises” in America and its Western allies. The Soviets weren’t just matching the technological might of the world’s first nuclear power, they were exceeding it, and showing the world just how effective their governmental model could be.

For the United States and its allies, dead set on preventing the spread of communism around the globe, these technological successes were seen as a clear and present danger to the American way of life. Those early Soviet wins led directly to the establishment of NASA, and the re-orienting of famed-former Nazi scientist Wernher von Braun away from the Redstone missiles he was tasked with building and toward the heavens. Von Braun’s work led to the development of the Saturn V rocket–a platform that took America to the moon and still remains the most powerful spacecraft ever constructed.

America’s eventual victory in the Space Race can be seen as indicative of America’s broad approach to battling the Soviets on technological and financial grounds. In fact, many credit President Ronald Reagan with effectively spending the Soviets into ruin, fielding increasingly capable military platforms and weapons, which forced the Soviets to respond in kind, despite their struggling economy. Of course, the fall of the Soviet Union can really be attributed to a number of factors, including the will of its populous, but it’s tough to discount the dire financial straights the former superpower found itself in by 1991–the year the Soviet Union ceased to exist, and a new Russian government took its place.

It was during this transitional time that the former Soviet Union gained a reputation for offloading military hardware to the highest bidder. The new Russian state lacked the funds needed to operate or maintain its massive military apparatus, or even to sufficiently pay large swaths of its personnel. As a result, military officials participated in the sale of military assets as a means of survival amid the nation’s economic collapse. In one instance, the Russian government themselves even traded the American soft drink company Pepsi a fleet of warships and submarines in exchange for a new shipment of soda. In another, members of the Russian Navy actually conspired to sell a diesel-electric submarine directly to drug cartels in Colombia for the purposes of smuggling as much as 40 tons worth of cocaine into the U.S. with each trip.

In 1980, a Russian man named Ludwig Fainberg arrived in Miami with his sights set on the American dream. He quickly found work as an enforcer for the Gambino crime family, doing the sort of work we’ve come to expect from Russians with mob connections — beating money out of people. Fainberg, who went by the name “Tarzan,” eventually made enough money to open his own strip club near the Miami airport that he dubbed “Porky’s!” after the sexploitation flick of the same name, which reportedly filmed in the same building. It wasn’t long before the strip club owned by a Russian with mob ties became the hangout of choice for members of Russia’s own organized crime community who were operating within the opulence of 1980s Miami.

Tarzan’s crime-connections and booming business helped him meet a number of powerful or influential figures on both sides of the law. 90s rapper Vanilla Ice was one such friend–and it was actually Mr. Ice himself who first introduced Tarzan to the man who would become his partner-in-crime: Juan Almeida. Almeida was a prominent businessman and crook who dealt in high-end boats and exotic cars. Before long, Tarzan and Almeida were in business together, flying in and out of post-collapse Russia, and purchasing everything from motorcycles to helicopters for pennies on the American dollar, which they would then sell to customers for a tidy profit.

Before long, the exploits of Tazan and Almeida would lead them into a business-based friendship with a man who would go on to be the star of his own episode of America’s Most Wanted, Nelson “Tony” Yester.

Yester had strong ties to the Medellín drug cartel run by none other than Pablo Escobar. By all accounts, Yester was a serious criminal–more serious than the somewhat jovial (and notably less-murderous) Tarzan and Almeida. Nonetheless, Tarzan and his new drug contact became fast friends. That friendship turned highly profitable when Tarzan and Almeida brokered a deal with Escobar’s cartel through Yester to purchase two heavy-payload Russian Kamov helicopters intended to transport drugs throughout Colombia.

That deal led to even deeper ties with Yester as a connection to Escobar, as the Russian mafia weren’t going to allow the helicopters to leave without getting a cut of the deal. In a turn of events that sounds like a movie, Almeida flew back to Moscow pretending to be Escobar and managed to broker another deal for cocaine distribution in newly minted Russia.

Do you want your drug submarine with missiles or without?

Having proven their value to the cartel, Tarzan and Almeida became the go-between of choice for sourcing Russian hardware. But the next request sounded crazy, even to the two men who had managed to charter a military cargo aircraft to smuggle their ill-gotten helicopters to Colombia. A part of Escobar’s cartel known as the Cali Cartel had split from his organization and quickly became a significant player in the drug business. They wanted a better way to smuggle drugs into the United States, so they approached Yester to see if his new friends could purchase a working Soviet Navy submarine for the job.

Yester, shooting from the hip, told them it would cost him $50 million–a figure that gave the Cali Cartel pause, that is until Yester told them he could ship $40 million worth of cocaine with it in each trip. For the cartel, it seemed like an investment that was worth the risk.

Once he was given the green light from his sources within the Cali Cartel, Yester contacted Tarzan to have him reach out to his connections in Russia. According to Tarzan’s own statements, he reached out to inquire, but was told it would take a few days to find out for sure. Two days later, Tarzan got the call.

“Do you want the submarine with missiles or without?” Tarzan recalls his contact saying in a 2018 documentary about the ordeal called “Operation Odessa.” Just like that, the ball was rolling to equip Escobar’s former drug cartel with their own military submarine.

Diesel-electric subs are easier to spot than the nuclear variety employed by the United States while on the surface, thanks to their loud engines and the need to vent their exhaust. However, the submarines themselves don’t actually run off of diesel. The props that give the submarines their propulsion are run with electric motors that are recharged by diesel engines. As a result, even diesel subs are incredibly tough to spot when submerged. In fact, in a series of war games held in 2005, the massive USS Ronald Reagan, a Nimitz-class aircraft carrier, was “sunk” repeatedly by a Swedish diesel-electric submarine that managed to sneak past the carrier strike group’s defenses.

The Russian sub in question was a Foxtrot-class, which had been in service since the 1950s. At 300 feet long, the sub had space to spare for all the drugs the Cali Cartel could want… as well as ten torpedo tubes, in case things got dicey under the sea.

It goes without saying that a vessel of this sort would come in particularly handy for a drug cartel looking for a way to transport large amounts of cocaine into Miami–which is a well-known distribution hub for drugs smuggled in from South and Central America.

Instead of buying a sub, Yester ripped off the cartel

Tarzan and Almeida flew to Russia, where to their surprise, they were able to meet directly with a number of high-ranking members of the Russian Navy who took them to one of their secret submarine installations to tour a sub similar to the one they were offering to sell. While the facility was a secret and the pending purchase would have been seen as highly illegal by just about every nation on the planet, Tarzan and Almeida felt they wouldn’t be able to secure the funds without proof that there really was a submarine on the other end of the deal. They asked if they could take pictures with the subs as proof, but the Russians refused to permit it for obvious reasons.