Risky Rise: How the CCP and China Has Evolved Under Xi Jinping 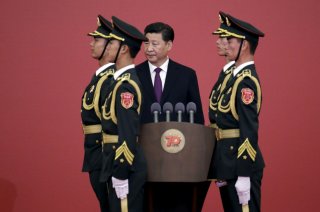 And so, on a slew of critical ‘either/or’ questions about China’s evolving political system and the country’s growing influence in the world, the answer to ‘what does Xi Jinping believe?’ isn’t one or the other, but rather, ‘yes’. Does he believe in centralised state planning or decentralised markets? Yes, both. Does he want to ‘make China great again’ through an aggressive nationalist domestic agenda, or is he seeking to expand the country’s influence within multilateral institutions? The answer, again, is yes, both.

Perhaps the most interesting aspect of Xi’s dialectical approach to China’s domestic and foreign affairs is his vision for the evolving role of the CCP. Whereas many external observers (and a good number Chinese) see an omnipresent Leninist Party-state as an impediment to China’s technological and global aspirations, Xi Jinping sees the Party as the prerequisite for China’s future.

The pursuit of this Party-dominated modernity may well be the most impactful element of Xi’s legacy, and the one that arguably introduces the most significant risks to China’s continued rise.

Starting early in his administration — 29 January 2013 to be exact — Xi began to outline and implement his agenda of aggressive ‘Party Building’, the systematic approach to strengthening and reinforcing the organisational resilience of the CCP at all levels. His campaign touched all areas of the CCP, from stepped-up political training to the entry-level requirements for member candidates. His anti-corruption campaign investigated millions, sanctioned hundreds of thousands and imprisoned some of the CCP’s highest-ranking officials. His ideological campaigns signalled to cadres that intellectual pluralism was a threat to the Party.

Further, the Party is now everywhere, or as Xi is fond of saying, ‘Government, the military, society and schools, north, south, east and west — the Party leads them all’. The cellular structure of the Party — its network of Party organisations — has been reactivated and reinvigorated to ensure there are no blind spots, areas potentially out of view of the Party apparatus. And the Party has grasped firmly on to the new, and often terrifying, Orwellian capabilities of modern-day communications and surveillance technology, pushing out the CCP’s field of view to even the most obscure corners of China’s vast territory and variegated population.

Why did Xi take on this task with such urgency, and not previous Chinese leaders? Without resorting to pop psychology, it’s clear from Xi’s speeches and writings that he is obsessed with the collapse of the Soviet Union, a historical interest shared by Russian President Vladimir Putin. Of course, this has long been an area of acute study by the CCP. As the People’s Daily clarified in October 2013, ‘for more than two decades, socialist China has never stopped reflecting on the destruction of the Soviet communist party and state by Soviet Communists’.

But Xi clearly saw that if the CCP was to avoid the fate of the Soviet communist party, it would need to do two things: begin systemically addressing ideological, institutional and political deficiencies of the CCP as an organisation and, equally as important, create a political climate where no Gorbachev — the architect of Soviet demise in Xi’s eyes — would ever be permitted to rise to power.

The CCP is a fundamentally different organisation under Xi than it was before, both in terms of the role it plays in society, and the political and ideological expectations that come with membership. This resuscitation, even if it does reposition the CCP for longer-term rule, has come at an extraordinary price. The political climate in China is as closed and conservative as it has been since 1989, and of course in China’s western frontiers, a million or more Chinese citizens are living under a technologically-enabled, neo-totalitarian surveillance state.

Can China change direction? Can a more moderate and tolerant CCP return? The answers to these questions may be inextricably linked to another: how long will Xi Jinping remain in power?