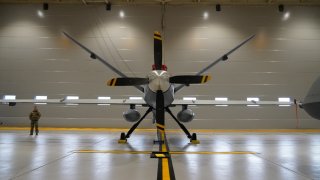 Here's What You Need to Remember: "Team Ignite" is a collaborative endeavor involving scientists, engineers, academics, concepts experts, and weapons requirements writers to explore the realm of the possible in terms of research, emerging technologies, maneuver formations, and new tactics, techniques, and procedures.

Robot armies on attack, self-driving tanks and massive, long-range, computer-enabled sensors and natural camouflage technology are just a few of the many dynamics expected to characterize warfare in 2035, a set of circumstances now under close and careful examination by teams of Army scientists looking to anticipate the wars of tomorrow.

The effort, called “Team Ignite,” is lodged within Army Futures Command. It is a collaborative endeavor involving scientists, engineers, academics, concepts experts, and weapons requirements writers to explore the realm of the possible in terms of research, emerging technologies, maneuver formations, and new tactics, techniques, and procedures.

“We have a good view of the future operating environment and are refining our understanding of what it will be in 2035 and beyond. There are some general characteristics of things that will pose challenges to the way we operate. At the classified level, we are looking at threat levels and the evolution of those threats over time. Gen. Murray (Gen. John Murray, Army Futures Command) started a series of future threat deep dives to see very specific threats into the future. We focus on an understanding of where we are with technologies and are conducting dive reviews of seventeen technology areas with partners from other services,” Maj. Gen. John A. George, Commander, Combat Capabilities Development Command, Army Futures Command, told reporters at the 2020 Association of the United States Army Annual Symposium.

Other areas of focus include research related to synthetic materials, biological phenomena and naturally occurring substances such as an organic material that can be used for camouflage because of how it filters light, Dr. Jean Vettel, Chief Scientist for Futures & Concepts Center and Ignite Senior Science Lead, told reporters.

Should the application of these synthetic materials come to fruition, they could help soldiers and combat units avoid detection from enemy sensors and satellites.

“We move into the experimentation phase to make data-informed decisions about moving forward with the most promising technology for the Army to maximize operational advantage,” Vettel said.

“Concept writers and scientists are sitting together penciling in how we might want to fight in the future, to make the right links between the concepts, requirements and technologies,” George said.