Rockets Strapped to Trucks? U.S. Special Ops Are Thinking About It For Sure. 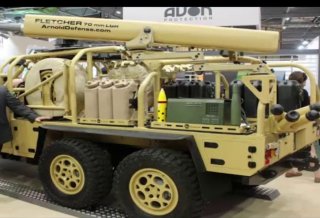 Here's What You Need to Remember: Though it remains to be seen what the final iteration of the FLETCHER and mounting system will look like, what is clear is that small groups of special operations teams and elsewhere will begin being equipped with a powerful new precision capability that, thanks to its comparatively small warhead size, will offer advantages over other larger missiles like the Hellfire.

Imagine this scenario: somewhere in Eastern Europe, members of the U.S. Special Operations Command race eastward towards a newly-formed front line. The small group of soldiers are riding in the Army-Marine Corps Joint Light Tactical Vehicle, a Humvee replacement. But, unlike the standard-issue JLTVs, these JLTVs are armed to the teeth with something you’ve never seen before—70-millimeter rockets normally loaded onto attack helicopters.

The 2.75-inch rockets, manufactured by Arnold Defense, made their combat debut during the conflicts in Vietnam and Korea, where the unguided rockets were used by combat aircraft in a close-air support role. Since then, Arnold Defense’s rocket has enjoyed wide service with militaries around the world. But, by mounting their rockets to vehicles, the St. Louis-based manufacturer is turning aerial power in a new direction, from air-to-ground area suppression to precision land-based, vehicle-mounted precision fire.

Details of Arnold Defense’s new rocket package are somewhat secretive, though a bit of information can be gleaned from a recent company statement:

“Arnold Defense is unable to disclose specific details regarding the new contracts in place however, one of the two orders has come from USSOCOM and the other is from an undisclosed European specialist unit. The timings, numbers, configurations and concepts of use are different for each customer, but Arnold and their integration partners will be delivering a combination of single (4-round) vehicle-mounted FLETCHER systems, as seen on display at numerous exhibitions and a new and unique twin-mounted (8-round) FLETCHER variant.”

From Air to Land

Artistic renderings of the FLETCHER weapon package shows a four-rocket pod like what the company described, mounted on a 360-degrees mount to an open-topped 4x4 vehicle.

According to Arnold Defense, the laser-guided 70-millimeter rocket has a precision strike range of 6 kilometers, or about 3.7 miles, and a maximum range of 8 kilometers, or nearly 5 miles. One of the obvious benefits offered by Arnold Defense’ system is that rather than designing a smaller precision rocket munition from scratch, their vehicle mounting system is compatible with existing 70-millimeter rockets stockpiled by the United States and other countries.

The FLETCHER system will use the APKWS rockets, a laser-guided 70mm rocket variant manufactured by BAE Systems, which is prized for bridging the gap between smaller unguided 70-millimeter rockets and the much larger and more powerful Hellfire missile.

A variety of warheads for the 2.75-inch rocket are available. These include conventional high-explosive, as well as several air burst rounds for area suppression use and various flechette and other anti-personnel rounds, though there is also a high explosive, anti-tank round.

Though it remains to be seen what the final iteration of the FLETCHER and mounting system will look like, what is clear is that small groups of special operations teams and elsewhere will begin being equipped with a powerful new precision capability that, thanks to its comparatively small warhead size, will offer advantages over other larger missiles like the Hellfire—enemies beware.