Rolling Lockdowns Could Protect Both Economies and Health in Underdeveloped Countries 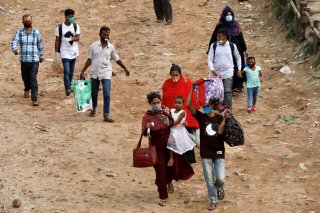 With no effective treatments for COVID-19 and a vaccine at least a year away, the main strategy for controlling the pandemic so far has focused on community-based interventions, such as lockdowns and physical distancing.

Worldwide, these measures have been effective in preventing health systems from becoming overloaded. They’ve flattened the infection curve and reduced deaths. But they come at a price.

Such interventions are unsustainable over time given their social and economic impacts, particularly in lower-income countries. For example, a recently completed survey in Bangladesh showed that after its initial days of lockdown, a staggering 72% of urban and 54% of rural households had lost their main source of earnings. Overall, the first month of the crisis is estimated to have reduced the global earnings of informal workers by 60%, with Africa and Latin America affected the most.

It was in this context that my colleagues and I proposed an alternative strategy: rolling lockdowns. We wanted to examine what would happen if we alternated between applying and lifting different types of community-based interventions to control the transmission of the virus. Would this provide a balance between avoiding health systems being overloaded and grinding economies completely to a halt?

How we tested rolling lockdowns

To test the strategy, we mathematically modelled scenarios in 16 countries over 18 months, focusing on how the virus’s R value (the number of people each infected individual goes on to infect) responded to different interventions being used. The selected countries represented diverse geographic and economic contexts, being drawn from all continents and including both high and low-income nations.

The countries were also at different stages of the epidemic. In each, we chose the point at which to start the modelling according to the proportion of people already infected. In worse-affected countries, the modelling of the interventions began sooner.

Our first scenario modelled a rolling cycle of 50 days of mitigation measures followed by a 30-day “relaxed” period. The measures used included general social distancing, hygiene rules (such as increased hand washing), isolating the infected, shielding the vulnerable, closing schools and restricting large public events. During the relaxed phase, no social distancing measures were in place and businesses were open; however, new case detection, contact tracing and shielding continued.

Our second scenario was stricter. It involved a rolling cycle of 50 days of suppression measures, such as nationwide lockdowns and restriction of all non-essential movements, followed by a 30-day relaxation. Cycles of these measures would reduce the R value to 0.5 and keep ICU demand within national capacity in all countries. Over the 18-month period, this approach would result in a significantly smaller number of deaths – just over 130,000 across all countries.

So we found that a rolling lockdown could avoid health systems being overloaded, but only if the lockdown period involved strict measures.

Where could we see a rolling lockdown introduced?

We believe that rolling lockdowns are particularly well-suited to low and middle-income countries (LMICs), where health systems may easily be overwhelmed. In these places, the risk of disease transmission is high: populations are often large and dense, with a lot of contact between people. Awareness of how to prevent disease is also often poor, and LMIC health systems are often under-resourced. They may, for example, have lower capacity when it comes to testing or ICU beds.

Many LMICs are also considering right now how to ease their lockdowns so that their economies can breathe – for instance Bangladesh, India and Pakistan have lifted theirs. In this scenario there are several potential exit strategies, but these are far from ideal.

The first option for these countries is to stay in a continuous West-style “mitigation-only” strategy – that is, maintaining general social distancing, shielding the vulnerable and so on, but lifting full lockdown.

However, this is challenging for two reasons. Firstly, it requires large-scale testing and contact tracing capacities, which may be unfeasible in large, dense populations. And secondly, the number of ICU beds and the size of the trained health workforce has to be adequate to treat a high inflow of critical cases, should infections spike. In LMIC settings this isn’t typically the case.

The second option is to adopt a “zonal lockdown” strategy, where rather than leaving the entire nation under lockdown, specific hotspots with increased cases are targeted. However, this approach is also problematic. It remains unclear how these hotspots will be identified in real time, given nationwide surveillance systems and testing and reporting capacities tend to be poor in LMIC settings. Managing the zones efficiently to reduce the virus’s spread both inside and outside of the zones is also very difficult.

Therefore, given the major challenges associated with these options, we think rolling lockdowns could instead be the answer. They would allow LMICs to keep the virus under control using their current capacity.

However, before implementing a rolling lockdown, every developing country should carefully consider the economic and social costs. It’s not known exactly how beneficial intermittently opening up an economy would be – and this would bring a new set of logistical challenges. For instance, countries would need bespoke plans for reorganising businesses’ supply chains, so that they align with the economy opening and closing.