The Royal Navy's New Aircraft Carriers Have Some Problems 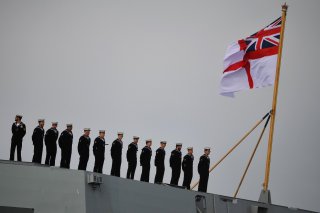 Here's What You Need to Remember: Despite the setbacks, the class has been deemed ready by the NAO for their first operational deployment with the United States in 2021 and will reach initial operating capability by December of this year—but with a limited radar capability.

In a recently released report, the UK’s National Audit Office concluded that although Britain’s new aircraft carriers have successfully conducted sea trials and will be ready for deployment in tandem with the United States next year, the Ministry of Defense is struggling to develop the necessary carrier support infrastructure.

Although the NAO considers the radar system a “crucial element of protection” for the carriers, it is eighteen months behind schedule. The Crowsnest radar capability will not be ready for operational deployment until September 2021. The NAO laid blame squarely at the feet of the aerospace company Thales, a Lockheed subcontractor for this project. Consequently, the NAO estimates that both Queen Elizabeth-class carriers will not have full radar detection capability until May 2023.

The other significant setback to the class is an insufficiently developed logistical support system, specifically support ships that would provide ammunition, food, and fuel to the carriers. Currently the Royal Navy has only a single ship available to resupply a carrier at sea—significantly hampering deployment tempo.

Despite the setbacks, the class has been deemed ready by the NAO for their first operational deployment with the United States in 2021 and will reach initial operating capability by December of this year—but with a limited radar capability. Until the Royal Navy’s Merlin subhunter helicopters are equipped with the radar capability they’ve been promised, the Queen Elisabeth-class will be left vulnerable.

Vulnerabilities aside, aircraft carriers do not operate alone. Though nuclear propulsion would have indeed been more expensive in the short-term, some of the logistical bottleneck could have been alleviated by opting for nuclear propulsion. Until the support and logistics bottleneck can be relieved, the carrier strike groups will have much shorter deployment times.