The Ruger Scout Rifle: Super Gun or Waste of Money? 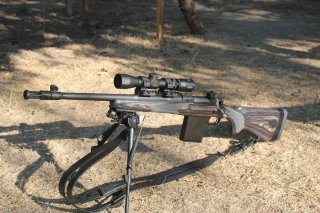 Key Point: Much of the marketing around Ruger's Scout Rifle has been hyped.

Ruger calls its Scout Rifle “the one rifle to have if you could only have one.” While this is clearly marketing, does this statement have any merit?

Not really. While the Ruger Scout Rifle is a decent choice for purists specifically for a Jeff Cooper-style bolt-action “Scout Rifle,” the utility of such a rifle for most shooters is questionable when modern semi-automatics are getting lighter and cheaper. It also faces stiff competition from other scout-style rifles by other manufacturers as well as cheaper bolt-actions in the Ruger catalog.

While Jeff Cooper originally drew up the criteria for a scout rifle in the 1980s, the idea was to have a “do everything” rifle that was still light enough to carry on extended patrols and accurate enough to shoot out to extended range. Cooper also specified that the caliber should be 7.62x51mm or 7mm-08. At the time, precision semi-automatic rifles in those calibers were still incredibly heavy: the 1980s-era PSG-1 weighs a hefty 15 lbs. As such, Cooper thought a bolt action rifle would be best to keep weight down to around 7 lbs.

The scout rifle concept also included a forward-mounted long eye relief low-power scope for precision shots. The forward mounting was to shift the point of balance forwards and to encourage both eyes open shooting, which allows for rapid reacquisition of the sight picture in rapid fire.

However, in recent years, both of these paradigms have been reversed. The popularity of the AR-15 revolutionized scope design, with modern Low Power Variable Optics designed for ARs proving to be incredibly fast and accurate without the learning curve of a forward-mounted scope.

The weight of ARs has also rapidly dropped following the sunset of the 1994 AWB and the explosion of aftermarket AR parts. Likewise, modern AR-10s weigh barely more than the Ruger Scout rifle while being practically just as accurate with a good barrel. The Christensen Arms G2 rifle weighs in at just one-tenth of a pound more than the Ruger Scout through extensive use of carbon fiber. The Sons of Liberty Gun Works Mk10 Ultra-Lite is heavier at nearly 8 pounds, but it provides a solid option for those who don’t like carbon fiber.

As such, it’s hard to see the benefits of a magazine-fed bolt action when magazine-fed semi-autos are close to the same weight. The magazine on the Ruger Scout also protrudes rather far from the bottom of the rifle. Given the great emphasis on the use of rapid slinging techniques in the scout rifle concept, this may prove to be a detriment to shooters who prefer to place their hands further back on the rifle. The first scout rifle to hit the market, the Steyr Scout, had a flush magazine for this reason.

Perhaps the Ruger Scout could have made sense if it was released earlier. But in 2019, in a world of ultralight ARs and $400 sub-MOA bolt actions, it’s hard to make a case for the Ruger Scout at its price point.

Charlie Gao studied Political and Computer Science at Grinnell College and is a frequent commentator on defense and national security issues. This article first appeared in 2019 and is reprinted here due to reader interest.