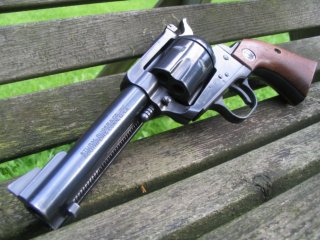 Here's What You Need To Remember: The Ruger New Model Super Blackhawk revolver mixes tradition and power, a design that harkens back to the days of America’s westward expansion while shooting one of the newest pistol calibers on the market. Although not for everyone, the .44 Magnum pistol has many applications, from target shooting to big game hunting. It, and handguns like it, will continue to fill a niche for a long time to come.

In the world of large caliber handguns, the most popular and powerful caliber by far is .44 Remington Magnum.

Also known as .44 Magnum, it requires a stout, equally powerful pistol or even carbine to shoot it. One gun up to the task is the Ruger Super Blackhawk, a single action revolver that combines the reliability and simplicity of a revolver with the energy of the famous magnum cartridge.

The .44 Remington Magnum cartridge was a progressive development of the .44 Special round. The .44 Special round, used in larger revolvers, was the rough equivalent to .45 ACP in semi-automatic pistols, particularly the M1911A1 in U.S. military service. Both were subsonic rounds with a typical energy load of 300 to 400 foot-pounds.

Noted gun enthusiast and writer Elmer Keith took the .44 Special round and through extensive testing supercharged it to new heights. The resulting .44 Remington Magnum starts at 741 foot-pounds and can achieve up to 1,400 foot-pounds of force, depending on the particulars of the load. This opened up a brand new frontier of powerful big bore revolvers suitable not only for target shooting but for taking on big game, including deer, bear, and other North American animals.

Although Smith & Wesson and Remington were persuaded to get behind the new round, the first revolver actually brought to market was from Sturm Ruger. Ruger was the first to ship a .44 Magnum round with its new Blackhawk revolver, upscaled from an existing .357 Magnum revolver frame. The revolver debuted in November 1956 at the price of $96—approximately $897 dollars in 2019 prices and just seventy dollars more than today’s suggested retail price for what is in many respects the same gun.

Today’s version, the New Model Super Blackhawk, is a revolver with an Old West design. The grip, frame, barrel and sights all resemble the Colt Single Action Army revolver, one of the most famous firearms in American history and a staple of western films. The New Model Super Blackhawk even comes in a so-called “Bisley” version, a takeoff on the Colt Bisley, a Single Action Army with a low hammer for competitive target practice.

A big bore handgun like the New Model Super Blackhawk needs to be strong to inspire user confidence. Unlike smaller high-capacity autoloading pistols, the gun is made entirely from steel. This is in turn reflected in the revolver’s weight: the Super Blackhawk, with a 7.5-inch barrel, weighs 48 ounces—or three pounds—unloaded. A version with a 10.5-inch barrel weighs 55 ounces. A full load of six rounds in the cylinder adds another three ounces.

The New Model Super Blackhawk is not a small gun. In addition to barrel length, the pistol’s length is also dictated by the length of the cartridge, which has an overall length of 1.61 inches. The shortest version, with a 3.75-inch barrel, is approximately 10.5 inches long. The more popular 7.5-inch model is 13.38 inches long, and the largest, with a 10.5-inch long barrel, is a massive 16.38 inches. The revolver is sold as a blued model with light colored hardwood grips, a satin stainless model with dark colored hardwood grips, and a distributor’s special with a western-style case hardened finish.

The Ruger New Model Super Blackhawk revolver mixes tradition and power, a design that harkens back to the days of America’s westward expansion while shooting one of the newest pistol calibers on the market. Although not for everyone, the .44 Magnum pistol has many applications, from target shooting to big game hunting. It, and handguns like it, will continue to fill a niche for a long time to come.

Kyle Mizokami is a writer based in San Francisco who has appeared in The Diplomat, Foreign Policy, War is Boring and The Daily Beast. In 2009 he co-founded the defense and security blog Japan Security Watch. (This article was originally published last year.)