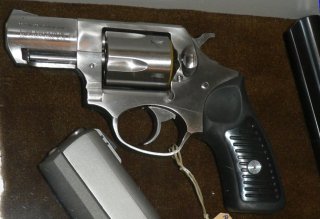 Here's What You Need to Know: The SP101 is small enough to fit in your pocket and designed for ultimate concealability and easy storage. Weighing in at around twenty-five ounces, it is a bit heavy for its size. However, this heft does help to mitigate some of the recoil.

Ruger’s SP101 is a small, durable, and elegant-looking revolver that’s great for concealed carry, personal defense, or even home defense. It’s available in a variety of calibers, including .357 Magnum, .38 Special, .327 Federal, and .22 LR. Throughout my years of owning this little revolver, I’ve never had any failures whatsoever. It’s incredibly reliable and built for years of consistent service.

The SP101 features a triple-locking cylinder, locked into the front, bottom, and rear of the frame to ensure dependability and positive alignment. There’s also a transfer bar safety, which will prevent any accidental discharges during concealed carry. The SP101 is very easy to take down for cleaning or maintenance, and requires no special tools to do so.

It comes with a sleek, brushed stainless steel finish for extra aesthetic appeal. While it’s not quite as nice as what you might find on a Smith & Wesson revolver, it’s still very high-quality. The SP101 also features a cushioned rubber grip with either a black synthetic or hardwood insert, depending on which model you choose. It feels nice in your hand, and there’s no exposed metal in the backstrap to further ensure a secure, comfortable grip. It’s great for me, but if the grip doesn’t quite meet your standards, the frame easily accommodates custom grips as well.

Most SP101 models come with a five-round capacity, apart from the .22 LR model (which comes with an eight-round capacity) and the .327 Federal (six-round capacity). You can shoot the revolver in double-action or single-action by manually cocking the hammer. I’d recommend shooting in single-action for a quick, light pull that breaks around 4 lbs, as the double-action pull can be long, gritty, and quite heavy, breaking around ten to eleven pounds.

This revolver comes in several different barrel lengths, including 2.25-inch, 3-inch, and 4.2-inch. It’s small enough to fit in your pocket and designed for ultimate concealability and easy storage. Weighing in at around twenty-five ounces, it is a bit heavy for its size. However, this heft does help to mitigate some of the recoil.

Just like the Taurus 380, it’s relatively soft shooting despite its small size. The .357 loads are much more snappy than .38 loads, but the combination of the revolver’s heavier weight, solidity, and cushioned grip make the recoil much more manageable than most snubnose revolvers.

As far as accuracy goes, you’ll have the best chance at hitting your target from short distances. Shooting in single-action helps with accuracy, as well. In fact, when I switched from double-action, I was able to cut my five-shot groups in half! My average grouping in single-action was just 1.5 inches from twenty-five yards, using various .38 Special loads. Getting small groupings from close distances (up to thirty yards) is easy, but anything further requires a bit of practice.

It comes standard with some basic sights, lowered to reduce the chances of snagging on your clothes when you draw the revolver from the concealed carry position. Both are adjustable for windage and elevation and set within the frame.

The MSRP of the Ruger SP101 is between $719–$769, depending on which model you choose, but you can usually find them online for around $550. It is a higher-than-average price, but extremely durable, soft shooting, and an excellent choice for anyone who needs an easy-to-conceal revolver for personal or home defense.