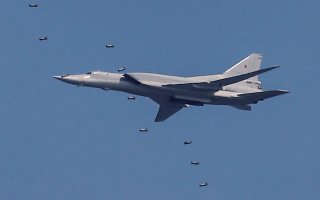 Here's What You Need to Know: The Tu-22M3's true role has always been a mystery to the outside world.

(This article first appeared in 2017 and is reprinted due to reader interest.)

Recently, the Tu-22M3 bomber has been the face of the Russian air force all over the world. Between dropping bombs over Syria to patrolling airspace over Japan, the Tu-22M3 has also been receiving a series of upgrades. These upgrades allow for greater bombing accuracy with conventional weapons, as well as the capability to fire new Air-Launched Cruise Missiles (ALCM). One of these upgrades may change how the Tu-22M3 is controlled under the New START treaty. It may finally be considered a strategic “heavy” bomber.

The status of the Tu-22M has long been under debate in the U.S. intelligence community. Back in 1971, when the Tu-22M first became known to the United States, the mission of the new Soviet bomber as unknown. Range estimates of the new bomber would allow it to attack the United States, albeit with air refueling. This would allow it to act in a strategic strike role. The Soviets maintained that the Tu-22M was not used for this role as it did not possess true intercontinental range, it would be used for attack and naval defense only on the periphery of the Soviet Union. This was even written into the aborted SALT-II treaty, the U.S. delegation wanted the Tu-22M not to be equipped with an air refueling system of any kind.

This changed in the early 1980s with the test of ALCMs on the Tu-22M. The addition of these missiles, which could be shot from ranges of around 3,000 km lead the Department of Defense and intelligence agencies to again believe that the Tu-22M would be used in an intercontinental strike capability. However, with the fall of the Soviet Union and START I in 1991, the Soviet side swore off any capability that would allow the Tu-22M to operate at intercontinental range, with the acknowledgment that the Tu-22M would not be considered a “heavy bomber” (eg. one of strategic importance) under START. This is the current assumption that is held under the New START treaty that was ratified in 2010 and expected to hold until 2021—only Tu-160 “Blackjack” and Tu-95 “Bear” bombers are listed in the START aggregate arms table.

Enter the new Tu-22M3M upgrade. Documentation for this upgrade was finally completed in November 2017, according to TASS. The upgrading of Tu-22M3 bombers to the new M3M standard will start in 2018. While many features in this upgrade are oriented towards greater conventional capability such as the new Gefest precision bombing system, other upgrades may allow it to act as a strategic weapon. Most notably, the avionics suite is said to be standardized with the Tu-160M2, a heavy bomber that is qualified as one under the New START treaty. While the TASS article mentions that the upgraded Tu-22M3M will be able to carry newer Kh-32 missiles with ranges of up to 600km, it has also been circulated that the new Kh-SD missile will also arm the Tu-22M3M. This missile is said to have ranges of up to 2000km, which would qualify it as a long range ALCM. While this missile is only conventional at the moment, it is derived from the Kh-55 missile, which is known to have nuclear capability. The implementation of this missile might change the status of the Tu-22M3M under New START, if the Kh-SD is confirmed to have nuclear capability.