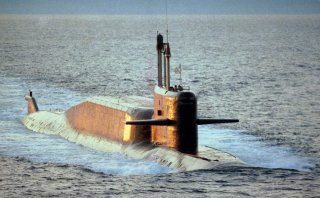 Here's What You Need to Remember: Novomoskovsk is reportedly the only submarine that has ever successfully been used as a launch platform for satellites.

The K-18 Karelia, commissioned in 1989, hosted Interim Russian President Vladimir Putin in 2000. Putin witnessed exercises and slept abroad the sub. In keeping with mariner tradition, “the ritual of initiating Vladimir Putin into a submariner took place. According to the ritual, the President drank some water from the sea, and then the certificate of honored submariner was issued to him.” Not a bad trade for drinking some saltwater.

This was the Novomoskovsk’s first attempt, after a botched 1989 attempt by sister ship K-84 Ekaterinburg, in which a leak inside one of the silos caused a fire, destroying the missile. The second, successful launch resulted in a nearly 700-ton launch. Though grainy, the actual video of the launch can be seen online.

The same submarine was involved in a collision off the Kola Peninsula with the U.S. nuclear attack submarine USS Grayling in 1993. Although both submarines sustained only light damage, the collision came at a politically sensitive time, as the first meeting between President Clinton and Boris Yeltsin was scheduled a week later.

Novomoskovsk is also reportedly the only submarine that has ever successfully been used as a launch platform for satellites. Perhaps in an attempt to earn revenue for the cash-strapped armed forces, the Novomoskovsk launched two German microsatellites.

In order to put out the fire, the Ekaterinburg was partially sunk, extinguishing the blaze. Officially, American and Soviet/Russian submarines must unload their weapons when docked, but reports indicate that the Ekaterinburg may have actually been fully armed at the time of the fire.

Reuters, quoting a Russian magazine detailed the accident, saying “Russia, for a day, was on the brink of the biggest catastrophe since the time of Chernobyl,” referencing what is widely regarded as the world’s worst nuclear disaster. Russian officials insisted that there was no radiation leak and that the submarine was unarmed, but a trip to a weapons depot immediately after the blaze could indicate otherwise. Video of the fierce blaze is available online.

Given the dearth of cash available to Russia’s armed forces, the Delta-Class Block IVs may not be retired for quite some time. Maybe a frightening prospect, considering the group’s shaky track record.