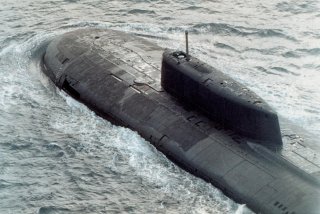 The Belgorod, recently launched from the Sevmash shipyard in northern Russia, is designed to carry the Status-6 Poseidon, an 80-foot-long robot sub with intercontinental range and armed with a 100-megaton warhead that to create a tsunami that will bury enemy coastal cities.

In addition to carrying an exotic weapon, the Belgorod has an exotic history. The vessel was laid down in 1992 as a giant Oscar II-class nuclear submarine -- the same as the doomed sub Kursk. Construction stopped in 1997 due to lack of funds, but work restarted in the 2010s as Project 09852.

Russia’s United Shipbuilding Corporation initially announced that the revised design was supposed to be a research vessel equipped with drones for underwater exploration as well as search and rescue, according to TASS. Russian defense analysts suggested that the Belgorod would a stretched Oscar II, becoming the largest Russian submarine afloat, with a length of 184 meters (604 feet).

But in 2015, Russian state television hinted at a new weapon called Status-6. “The presentation pointed to the Belgorod and Khabarovsk submarines that were being built as the carriers of this system,” TASS noted. “No official comments followed.”

Construction of the Belgorod after launch will be completed while the vessel is afloat. Dockside trials and tests of the sub’s nuclear reactor are scheduled for this year, with sea trials and then delivery to the Russian Navy in late 2020.

Naval analyst H I Sutton, examining photos of the Belgorod’s launch, noted some unusual features of the submarine. “The stern is traditionally one of the most sensitive parts of the boat because the design of the screws (propellers) have long been a key feature for stealth, and conversely, for individual boat acoustic identification,” he wrote. “However, for Belgorod they are eclipsed by the extensive and secretive modifications to the massive hull.”

In particular, Sutton pointed to a bulge on the lower hull. “This may relate to retractable steerable thrusters for precise position holding.”

Regardless of the Belgorod’s size or features, it is the sub’s armament that will attract attention. Putin has played up a new generation of new strategic weapons such as the Poseidon drone, the Avangard rocket-lofted glider and nuclear-powered cruise missiles, as symbols of Russian power.

Others dismiss these weapons as bizarre novelties of limited value. In the case of Poseidon, which allegedly can travel at 115 miles per hour and operate at a depth of 1 kilometer (3,280 feet) below the ocean’s surface. But it could still take weeks to reach its targets, which is far slower than a Russian ICBM that can hit any target on Earth – including the United States – within 30 minutes. Putin touts Poseidon as a weapon that can penetrate American ballistic missile defenses aimed at stopping rockets in the atmosphere rather than drones under the ocean. But it would still seem cheaper to build additional ICBMs to saturate U.S. missile defenses, rather than build a handful of submarines that can only carry a few Poseidons each.

This story was first published in 2019.