Russia’s Iskander Missile Has a Warhead for Every War Possible 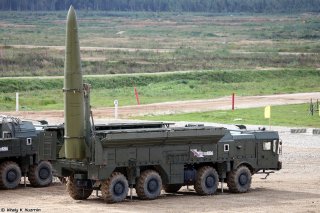 Here's What You Need To Remember: The Iskander system is deployed in Russia proper, as well as in Kaliningrad, an important Russian exclave next to Poland and the Baltic Sea. From Kaliningrad, the Iskander can hit targets in Poland, parts of eastern Germany, southern Sweden, Latvia, Lithuania, and Estonia, Belarus, and a great part of the Baltic Sea.

The SS-26 Iskander missile has a range of approximately 400 to 500 kilometers, or about 250 to 310 miles. It can carry a variety of warhead types, including earth penetrator, high explosive, or thermobaric. Export models have a shorter, 280-kilometer range (about 175 miles), and a smaller 480-kilogram payload (nearly 300 pounds), while the Russian service standard payload is 480 to 700 kilograms (300 to 430 pounds).

It’s also quite accurate. The Iskander uses a combination of “inertial, GLONASS, and radar terrain correlation guidance, the missile can strike targets within a circular error probable (CEP) of 2 to 5 meters.” In layman’s terms, the Iskander has a 50 percent chance of falling 2 to 5 meters away from a target point. While that doesn’t sound like much, Scud-D missiles have a CEP of 50 meters, making them much less accurate.

One of the noteworthy aspects of the transporter. It is capable of carrying two Iskanders at a time in a side-by-side configuration. The transporter itself has an armored roof to protect the missiles inside, and the transporter cabin is protected against chemical, biological, and nuclear hazards. Reload vehicles also travel with Iskander transporters on the battlefield and can conduct rapid reloads using a crane.

The Iskander system is deployed in Russia proper, as well as in Kaliningrad, an important Russian exclave next to Poland and the Baltic Sea. From Kaliningrad, the Iskander can hit targets in Poland, parts of eastern Germany, southern Sweden, Latvia, Lithuania, and Estonia, Belarus, and a great part of the Baltic Sea.

Kaliningrad-based Iskanders are an excellent example of Russian coercive diplomacy. From the exclave, Russia can hit targets in most of the Baltic Sea, threatening an important shipping route, and hit NATO targets. Since the Iskander system does not carry a nuclear payload, there is less risk of causing a nuclear confrontation.

Although several countries have expressed interest in the Iskander system at different times—Syria, Iran, and the United Arab Emirates in 2005, India, Kuwait, South Korea, Syria, Malaysia, and again the UAE in 2008, Saudi Arabia in 2015—Armenia and Algeria are apparently the only countries to have bought the Iskander system, in 2016 and 2017 respectively.

Russia’s missile collection is both formidable and imposing, as well as in a state of repair. The Iskander is no exception, and is representative of a post-Soviet strategy of increasingly precise missile technology. Combined with a clear anti-access/area denial strategy, especially near the Baltic Sea based in Kaliningrad, the Iskander is an effective weapon.