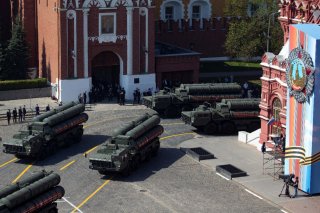 Here's What You Need to Remember: Russian Defense Minister Sergei Shoigu previously said that the deliveries of the latest S-500 surface-to-air missile systems to the troops would begin this year, while serial deliveries were scheduled for 2025. Russia has been training specialists to learn to operate the new system at the Military Academy of the Aerospace Force in Tver since 2017.

The Russian-built S-400 Triumf is considered one of the best all-around strategic surface-to-air missile (SAM) systems in operations today. The platform was designed to provide protection from airstrikes including cruise, tactical and operational ballistic missiles as well as intermediate-range missiles in a radio-jamming environment, and it can also be used against ground installations.

The S-400 entered service in 2007, but the Russian military has already begun work on its eventual replacement, the S-500. According to a report from Tass, Russia will complete its work on the advanced anti-aircraft missile system next year.

"It should be noted that the work on developing the S-500 mobile air defense and anti-ballistic missile system is scheduled to be completed in 2021," Commander-in-Chief Lieutenant-General Andrei Yudin said in an interview with the Defense Ministry’s Krasnaya Zvezda newspaper on Friday.

Earlier this year, at the Army-2020 international arms show outside Moscow, Russian Deputy Prime Minister Yuri Borisov said that the S-500 was already undergoing state trails while work was well underway to purchase the components, which would allow for it to enter serial production.

Those first trials of the S-500 reportedly took place last year, and during the test launches, the new Russian anti-aircraft missile system struck a target at a range of 481.2 km, which was 80 km further than any existing missile system.

The S-500 can reportedly detect and simultaneously attack up to ten ballistic missile warheads flying at speeds of over four miles per second. The anti-missile platform also can utilize several distinct radar systems that are geared toward different targets – and this could include different radars to detect planes, helicopters, drones and missiles at the same time.

It is expected to use the 1N6A(M) battle management radar, a modified 96L6-TsP acquisition radar, as well as the new 76T6 multimode engagement and 77T6 ABM engagement radars. With a widely expected maximum operating range of 600 km, and a system response time of three to four seconds, the S-500 is around six seconds faster than the S-400. Its manufacturer, Almaz-Antey, has even claimed that the S-500 could strike low-orbit satellites and certain types of spacecraft in near space. It has even been claimed that the S-500 could be a "silver bullet" against stealth fighters such as the F-35, but it still has yet to be revealed how many of the systems Russia would be able to produce in the coming decade.

Russian Defense Minister Sergei Shoigu previously said that the deliveries of the latest S-500 surface-to-air missile systems to the troops would begin this year, while serial deliveries were scheduled for 2025. Russia has been training specialists to learn to operate the new system at the Military Academy of the Aerospace Force in Tver since 2017.

It seems that Russia hasn't maintained the time table, but for now, the Russian military has continued to deploy the S-400 missile system to its units. In September the Russian Ministry of Defense announced that two Eastern Military District air defense regiments would be equipped with the Triumf platform.