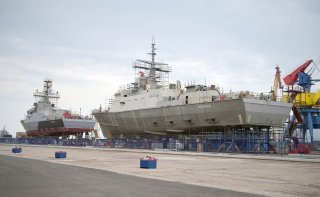 Here’s What You Need to Remember: First unveiled at Russia’s ARMY 2015 defense exhibition, the Project 22800 Karakurt-class is a new line of green-water guided missile corvettes. With as many as eighteen such corvettes slated for construction throughout the mid-2020s, the Karakurt-class ships will be widely circulated throughout the Russian Navy’s Baltic, Black Sea, and Pacific Fleets.

"By late 2021, we expect the handover of the Tsiklon and Burya corvettes. In 2022, another ship of this class, the Askold, is expected," a source in Russia’s shipbuilding industry told Russian state news outlet TASS.

First unveiled at Russia’s ARMY 2015 defense exhibition, the Project 22800 Karakurt-class is a new line of green-water guided missile corvettes. With as many as eighteen such corvettes slated for construction throughout the mid-2020s, the Karakurt-class ships will be widely circulated throughout the Russian Navy’s Baltic, Black Sea, and Pacific Fleets.

The Karakurt vessels are designed to complement, rather than replace, the Russian Navy’s modernized Buyan-M corvettes. At a displacement of roughly 850 and 950 tons respectively, the Karakurt and Buyan classes reflect a Russian naval modernization strategy increasingly focused on transitioning to a lean, local rapid-response force. The new ships boast a speed of thirty knots and range of 2,500 nautical miles (nmi), both marginal improvements over the Buyan-M class. The Karakurt corvettes are intended to not only engage hostile surface ships but also to target enemy coastal infrastructure and military assets. Relatively fast, agile, and maneuverable, these ships are suitable for a wide range of battlefield tasks that likewise include search-and-rescue and air defense operations

The first two Karakurt-class corvettes, Mytischi and Sovetsk, were laid down in late 2015 and are both currently serving in the Baltic fleet. The third active Karakurt vessel, Odintsovo, also went to the Baltic Fleet, with the latter slated to receive at least three more models through 2022. Karakurt-class ships laid down from 2016 onward will be armed with the Pantsir-M, a naval version of the Pantsir surface-to-air missile (SAM) system. The Pantsir-M is believed to be effective against certain types of aircraft as well as anti-ship and cruise missiles—the new system can simultaneously engage up to four targets at a range of up to twenty kilometers. The Karakurt class’s primary armament consists of a total of eight vertical launching system (VLS) cells, capable of firing P-800 Oniks and Kalibr cruise missiles. The Navy is reportedly evaluating the feasibility of outfitting some Karakurt models with 3M22 Tsirkon, Russia’s new winged, anti-ship hypersonic cruise missile that is reportedly capable of reaching speeds approximating Mach 9. The current status of those deliberations remains unclear.

Two of the three corvettes—Askold and Tsiklon—are being constructed at Russia’s Butoma shipyard in Crimea, highlighting the Kremlin’s efforts to make the annexed peninsula an inseparable part of Russia’s domestic defense industry. The third, Burya, is being built at the Pella shipyard in Russia’s northwestern Leningrad region.