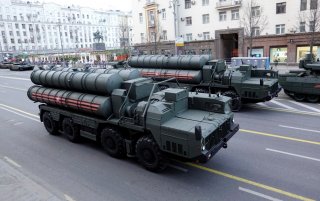 Here's What You Need to Remember: While no formal request has been made, it is still unclear if Moscow would in fact go through will the deal or whether this is political posturing that shows that a deal could happen in the future.

Despite objections from the United States, Moscow could be inching closer to a deal with Tehran whereby the Islamic Republic of Iran could obtain the advanced S-400 Triumf missile air defense system. Ambassador Levan Jagarian told the Resalet daily newspaper that Russia saw no problem in moving forward with a sale of the platform when the United Nations arms embargo on the Islamic Republic expires on October 18.

“We are not afraid of the U.S. threats and we will live up to our commitments,” said Jaragain, and that reportedly included considering Iranian arms requests despite pressure from the United States and its allies to isolate the government in Tehran.

In August the UN Security Council rejected a U.S. proposal that would have extended the arms embargo, which was put in place as part of the 2015 Joint Comprehensive Plan of Action—commonly referred to as the Iran nuclear deal, Newsweek reported. The Trump administration withdrew from the deal in 2018, but has claimed that the end of the embargo could further destabilize the region as Tehran could immediately begin purchasing weapons from other powers.

As a result, the United States currently has no viable path to impose a ban on the sales of weapons to Iran, and the United States has already warned that Iranian-supplied weapons could flood into neighboring areas of conflict including in Iraq, Lebanon, and Yemen—where Tehran backs militant groups.

The S-400 Triumf system (NATO reporting name: SA-21 Growler), which was developed and produced by Almaz-Antey, was designed to provide protection from airstrikes including cruise, tactical, and operation ballistic missiles as well as intermediate-range missiles in a radio-jamming environment.

It has been widely considered one of the most advanced operational anti-aircraft systems in the world. It can also be used against ground installations. The S-400, which can also launch 40N6 missiles, is designed to engage targets at a distance of up to four hundred kilometers at up to six times the speed of sound, and at an altitude of up to thirty kilometers under intensive enemy fire and jamming.

The platform has been sold to foreign partners including Belarus and China—but Moscow has postponed all S-400 related deliveries to Beijing. It has been reported this is to maintain a great level of neutrality between Beijing and New Delhi.

The Iranian military already maintains numerous SAM systems imported from the United States and Europe half a century ago, but it lacks access to spare parts and new missiles. However, Tehran has been able to acquire modest numbers of SAMs from China and Russia.

The S-400 could give Tehran the ability to combat Western aircraft, and that could potentially even include advanced fighters such as the F-35 Lightning II Joint Strike Fighter.

Just last year Russia had rejected a request from Iran to purchase the S-400 platform, citing concerns that the deployment could increase security tensions in the Middle East. That was then, and now it seems Moscow has done an about-face and could entertain a request from Tehran.

While no formal request has been made, it is still unclear if Moscow would in fact go through will the deal or whether this is political posturing that shows that a deal could happen in the future.