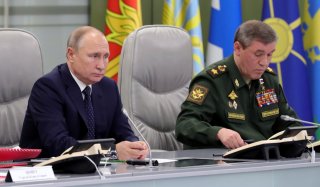 Here's What You Need to Remember: Russian Federation President Vladimir Putin told reporters that the S-500 surface-to-air missile/anti-ballistic missile system could be a possible “antidote” against an enemy’s hypersonic missiles.

Russia is reportedly working on such technology, and last week Russian Federation President Vladimir Putin told reporters that the S-500 surface-to-air missile/anti-ballistic missile system could be a possible “antidote” against an enemy’s hypersonic missiles.

Peter Suciu is a Michigan-based writer who has contributed to more than four dozen magazines, newspapers and websites. He regularly writes about military small arms, and is the author of several books on military headgear including A Gallery of Military Headdress, which is available on Amazon.com. This article first appeared last year.​