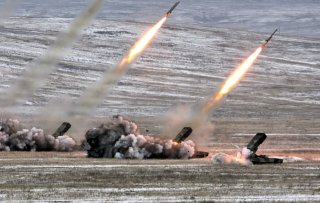 Here's What You Need to Remember: The Buratino was succeeded in 2001 by the more advanced TOS-1A, bringing a vastly expanded range of six thousand kilometers, revised launching tubes, and a slew of chassis upgrades. Despite their somewhat niche battlefield role, the TOS-1 and TOS-1A have proven to be fairly popular export products

Decades after its introduction, the TOS-1 remains one of the deadliest conventional weapons systems in Russia’s rapidly expanding arsenal.

Beginning in the 1960s, the United States and the Soviet Union took an increasing interest in fuel-air explosives (FAEs). An FAE is a two-charge weapon that disperses a chemical cloud; that cloud is then ignited, causing a devastating blast wave in a wide radius. FAEs detonate the air. Thus, they are most effective in enclosed spaces where they can turn the tactical advantage of reinforced structures like bunkers and tunnels into a lethal weakness.

The U.S. military deployed FAEs during the course of the Vietnam War. Not to be outdone, the Soviet military got to work on its own version of a thermobaric weapons system. Introduced in the 1980s, the TOS-1 Buratino “heavy flamethrower system” is built from the T-72 main battle tank chassis. It can carry two types of 220-millimeter rockets, split between incendiary and fuel-air explosive warheads. The name Buratino—a nod to the long-nosed Pinocchio character—refers to the system’s protruding thirty-tube launcher unit, capable of unleashing a full salvo in up to fifteen seconds.

The TOS-1’s multiple launch rocket system boasts a firing range of only up to 3.5 kilometers and can cover an area of two hundred by four hundred meters, cementing the weapon’s role as a fire support platform for infantry and heavy armor. What this means, in practical terms, is that TOS-1 groups can devastate enemy fortifications within a relatively large area in a short time span.

Death by TOS-1 salvo is an eminently unpleasant experience. Depending on a person’s proximity to the detonation, the overpressure and subsequent combustion from the blast wave can inflict significant damage to internal organs, as well as broken bones, ruptured eardrums, blindness, suffocation, and loss of consciousness in the victim’s last moments.

The TOS-1’s destructive firepower was first laid bare in the latter stages of the Soviet occupation of Afghanistan and, again, during the Second Chechen War. The latter is a particularly jarring case of FAEs being used in dense, urban environments, obliterating entire swathes of the Chechen capital, Grozny, and costing numerous civilian lives in the process.

The Buratino was succeeded in 2001 by the more advanced TOS-1A, bringing a vastly expanded range of six thousand kilometers, revised launching tubes, and a slew of chassis upgrades. Despite their somewhat niche battlefield role, the TOS-1 and TOS-1A have proven to be fairly popular export products. The Iraqi army has used these weapons against the Islamic State of Iraq and the Levant militants from 2014 to 2017. TOS-1s were likewise used by the Syrian military against anti-government forces during the Syrian Civil War, with unconfirmed reports indicating that at least one such system was destroyed by rebels in 2016. More recently, video footage has emerged of Azerbaijan’s military allegedly launching TOS-1A salvos against Karabakh separatists during the 2020 Nagorno-Karabakh War. Saudi Arabia has recently purchased a batch of TOS-1A units as part of a larger $3 billion deal with Russia.