Russia Has Discovered Some Problems With its Robotic Tanks 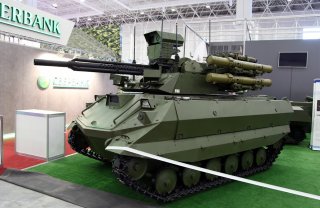 Here's What You Need to Remember: "Shortcomings were identified during the tests in Syria. In particular, the issues of control, reduced mobility, and unsatisfactory military intelligence and surveillance functions had been considered by engineers and were rectified," said Vladimir Dmitriev, head of the Kalashnikov Concern.

Somewhere Putin is smiling: The first robot tanks are about to report for duty.

The Russian Ministry of Defense announced that a unit of the Russian Army equipped with "strike robot" is set to be established.

Russia's Minister of Defense Sergei Shoigu has already reviewed the fulfillment of the defense procurement plan, which will see the formation of the country's first unit to be equipped with the Uran-9 robotic combat systems.

The plan was presented at the 766th Production and Technological Enterprise in Nakhabino outside Moscow. It develops and manufactures robotic vehicles of various designations for the Russian military.

"As Chief of the Army Main Staff Vasily Tonkoshurov reported to the defense minister, the first unit with strike robots will be set up in the Russian Armed Forces to operate five Uran-9 robotic systems or 20 combat vehicles," the ministry told Tass earlier this month.

The Uran-9 robotic tank is a semi-autonomous vehicle that can be controlled remotely from distances of up to 1.8 miles away. It can maneuver in the field over a variety of rough terrain and provide cover for soldiers.

It is equipped with a 30mm automatic cannon as well as Ataka anti-tank missiles and Shmel flamethrowers. However, it still isn't a true "terminator" in the sense that it can operate independently without human control. Thus, while described as a "robot," it would be more apt to call it a "remote-controlled tankette."

The newly formed experimental unit will conduct tests to determine how the Uran-9 platform can be best employed. The testing will reportedly take place at one of the Defense Ministry's scientific research centers.

"This center will subsequently train personnel that will operate Uran-9 strike robotic vehicles in operational military units," the ministry added.

However, Moscow already has put the Uran-9 to the test, as a few of the systems were employed in real-world combat situations in Syria. A pair of the twelve-tone vehicles – which measure five meters long are one-fifth the weight and just over half the length of a T-90 tank – were deployed for field testing. Two Uran-9s were reportedly transported to the battlefield by a large truck, and then radio-controlled by an operator and commander in an armored 6x6 Kamaz truck.

The Uran-9's diesel engine allows the vehicle to accelerate to twenty-two miles per hour on highways, or six to fifteen mph off-road. According to the developers, the steel armor plates can protect it from shell splinters and small-arms—though implicitly it may remain vulnerable to other relatively common weapons such as RPGs or heavy machine guns.

In the testing in Syria, the Uran-9 wasn't seen as a major success, in part because of a limited field of view for the operators, while the unit also failed to respond quickly enough at critical times.

"Shortcomings were identified during the tests in Syria. In particular, the issues of control, reduced mobility, and unsatisfactory military intelligence and surveillance functions had been considered by engineers and were rectified," said Vladimir Dmitriev, head of the Kalashnikov Concern.

This could explain why the Russian Army is creating a new unit to work out the kinks in the platform, while additional testing will occur in a safer environment.

The Russian military has already announced efforts that could soon utilize heavy robots for mine clearance, while in the future these could be deployed as scouts, and in radiation and chemical reconnaissance roles.