Russia Has a Problem: It Builds Su-57 Fighters Too Slowly 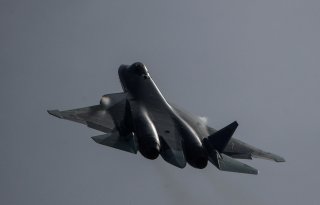 Here's What You Need to Remember: The new fighter's delivery rate was expected to grow to 15 per year with 76 delivered to the Russian military by 2028.

In development since 2002, the Sukhoi Su-57 Felon is Russia's fifth-generation multirole fighter that could also be a key part of the country's arms export industry. Designed to combat and destroy a range of air, ground, and naval targets, the aircraft took to the skies for the first time on January 29, 2010. Russian state media and other international sources compared it favorably to its predecessors.

The single-seat, twin-engine multirole Su-57 combines the functions of an attack plane and a fighter jet while the use of composite materials and innovation technologies, along with the fighter's aerodynamic configuration, ensure that it has a low level of radar and infrared signature. The advanced jet fighter's stealth technology further utilizes a broad range of composite materials, while the aircraft is capable of developing supersonic cruising speed.

It is thus speedy and seemingly difficult to track.

Rostec, the Russian high-tech conglomerate, has also highlighted that the Su-57 is furnished with the most advanced onboard radio-electronic equipment, including a powerful onboard computer described as a "so-called electronic second pilot;" while the radar system spread across its body.

In addition to its speed and low radar signature, the Su-57 is a well-armed and combat-capable aircraft. During the August 2013 MAKS Air Show outside of Moscow, the aircraft's manufacturer highlighted the fighter's weapons platforms including missiles that could be fitted into the fighter's voluminous weapons bays or under its wings and fuselage.

The Sukhoi Su-57 features two large internal weapons bays arranged in tandem, which run nearly the entire useable length of the aircraft. Each of those bays can carry up to four K-77M beyond visual range radar-guided missiles. Compared to earlier versions of the K-77 (NATO nickname: AA-12 Archer) the K-77M missile has a larger body and active electronically-scanned array radar seeker, allowing it to engage highly agile targets at ranges of up to 100 miles. The aircraft also stores a pair of K-74M2 short-range infrared-guided missiles in underwing fairings.

It has also been reported that the stealth fighter was being equipped with new variants of the Vympel NPO R-77 medium-range air-to-air missiles. Footage of the Su-57 appeared in an official state produced documentary commemorating the 100-year anniversary of the founding of the 929th V.P. Chkalova State Flight Test Center.

To date about a dozen Su-57s have been produced including 10 prototype/test aircraft, along with two that were serially produced. In November, TASS reported that the Russian Ministry of Defense would receive those serially-produced aircraft with the operational first-stage engine and would receive four more aircraft next year.

The new fighter's delivery rate was expected to grow to 15 per year with 76 delivered to the Russian military by 2028.

Russia has also been conducting flight tests of the Su-57's second-stage engines, codenamed Item 30, which will allow the fighter to develop supersonic speed without using an afterburner. The engines will eventually be serial-produced at the UEC-Ufa Engine Production Association – part of the United Engine Corporation within Rostec.

The development of the aircraft has not been without some issues. In December 2019, a Su-57 crashed and exploded during a training session in Russia's Far East. The fighter was believed to be the first serially produced Su-57, which was supposed to be transferred to the Russian Air Force that same month.

In August 2020, at the Army-2020 International Military and Technical Forum, the Su-57E export version of the fifth-generation fighter was demonstrated for the first time. Potential foreign operators include Algeria and India, but also notably Turkey, which could adopt the plane given that it was expelled by the United States from the Lockheed Martin F-35 Lightning II Joint Strike Fighter program for its purchase of the Russian-built S-400 anti-aircraft defense system.