Russia Has Sold Nearly $200 Billion in Weapons Since 2000 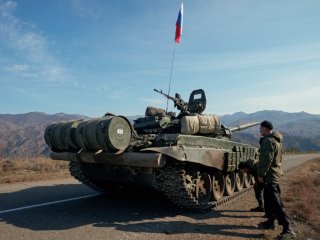 Here's What You Need to Remember: Despite the ongoing pandemic, this year's Army 2020 event was not noticeably scaled down from its previous iterations. More than 1,316 exhibitors and just fewer than 12,000 total participants reportedly attended the event, suggesting roughly the same engagement as last year's ARMY 2019.

The first two decades of the 21st century have been good ones for military contractors. The United States has remained the top arms seller, and in a five-year period from 2015 to 2019 exported military hardware to 96 countries, according to the Stockholm International Peace Research Institute (SIPRI). The United States accounted for 36 percent of the total global arms exports in that period.

Following in second place was Russia, which accounted for 21 percent of arms exports.

This week, Tass reported that the Russian state arms seller Rosobornexport, which is part of the tech conglomerate Rostec, delivered military hardware worth $180 billion to its foreign customers over the past two decades.

"The company’s financial indicators - the order book and the delivery volume - have risen fivefold since 2000. Over these years, Rosoboronexport has concluded more than 26,000 contracts with partners and delivered products worth a total of over $180 billion to 122 countries of the world," said Rostec CEO Sergei Chemezov via the company's press office.

Rosoboronexport CEO Alexander Mikheyev added that the sales have allowed Russia to maintain its second place on the global arms market. "Our foreign partners have received hardware worth over $85 billion for their Air Forces," he noted. "The deliveries for our customers' air defense and land troops have topped $30 billion for each of these military branches and have amounted to over $28 billion for their Navies."

To drive the sales of its military hardware Russia has increasingly "upped its game" quite literally – and now holds its annual International Army Games. First staged in August 2015, it has involved close to 30 countries taking part in dozens of competitions over two weeks. Organized by the Russian Ministry of Defense, the games feature 31 competitions, most of which involve military hardware. These include a "Tank Biathlon," "Seaborne Assault" and multiple dog and equestrian events. The games are primarily held in Russia at the Alabino training ground and Kubinka airfield just outside Moscow.

The International Army Games coincide with the annual Army-2020 International Military and Technical Forum, which is essentially a tradeshow for all things Russian military hardware. The most recent event was held this past August, where Russia's state arms sellers offered almost 50 new weapons systems to the world market.

This year's event included demonstrations of the T-14 "Armata" tank; the Su-57 fight-generation fighter jet, which was offered for export for the first time; and the entire family of Kalashnikov new-generation assault rifles.

Despite the ongoing pandemic, this year's Army 2020 event was not noticeably scaled down from its previous iterations. More than 1,316 exhibitors and just fewer than 12,000 total participants reportedly attended the event, suggesting roughly the same engagement as last year's ARMY 2019. All this suggests that Russia will likely maintain its second-place position in the global arms market and has nowhere to go but up.

Peter Suciu is a Michigan-based writer who has contributed to more than four dozen magazines, newspapers, and websites. He is the author of several books on military headgear including A Gallery of Military Headdress, which is available on Amazon.com. This article first appeared last year and is being republished due to reader interest.