Russia Insists Its Only Aircraft Carrier Will Reenter Service in 2023 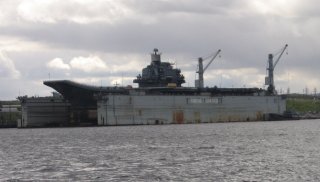 Here’s What You Need to Remember: One might assume that the combined weight of these mishaps would place Admiral Kuznetsov a hair’s breadth away from the scrap heap, but the Kremlin apparently has other plans. Russian officials insist that Kuznetsov will re-enter service by the first half of 2023, replete with electronics, structural, and landing control upgrades, as well as a revamped weapons suite.

One might assume that the combined weight of these mishaps would place Admiral Kuznetsov a hair’s breadth away from the scrap heap, but the Kremlin apparently has other plans. Russian officials insist that Kuznetsov will re-enter service by the first half of 2023, replete with electronics, structural, and landing control upgrades, as well as a revamped weapons suite. Russia’s military and civilian leadership appear to have decided that Admiral Kuznetsov is, in a sense, too big to fail, and is willing to make massive investments in order to ensure the ship’s survival into the coming decades.