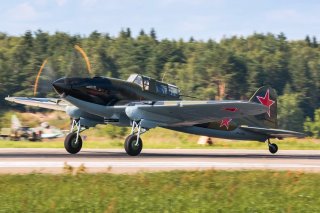 The rockets, bombs and heavy cannons used by ground-attack planes were simply too inaccurate, and most could only penetrate the top armor of a tank, necessitating steep angles of attack.

Nonetheless, attack planes like the Sturmovik could still disrupt armored attacks, blast entrenched troops and artillery, and strafe columns of soft-skinned trucks and light armor. While some estimate between five and 10 Il-2s were lost for every Axis tank they knocked out — and aircraft are generally more expensive to build than tanks! — ground-attack planes proved their value against unarmored targets, which were in abundance.

By 1943, the VVS began to field the Il-2M3 model, which corrected many of the flaws of its predecessor. The tail gunner finally received 13 millimeters of plate armor, while the leading edges of the wings were swept back 15 degrees in order to compensate for the shift in the center of gravity, greatly improving the Sturmovik’s handling.

An uprated AM-38F engine boosted the Sturmovik’s speed to compensate for added weight.

Admittedly, the Il-2’s maximum bomb load remained unimpressive compared to that of higher-performing fighter bombers then entering service — but the Sturmovik was beloved for its ability to fly “low and slow” and could survive hits that nimbler fighters could not.

Thousands of Sturmoviks supported the Red Army through the end of World War II, even pounding the last entrenched defenders outside of Berlin in the massive four-day Battle of the Seelow Heights. By that time, the Il-2 was joined by an evolved cousin, the all-metal Il-10.

Though similar in appearance, the aerodynamically cleaner Il-10 had superior handling and benefited from a more powerful AM-42 engines, which raised maximum speed to 342 miles per hour. Of the 6,000 built through 1954, around 150 saw combat before the German surrender.

Soviet records state that a total of 11,000 Il-2s were lost in action during World War II, although some sources estimate the true total to be twice that. Whatever the case may be, a great many Sturmoviks served on into the 1950s in the VVS and in states such as Mongolia, Yugoslavia and Poland.

The Il-2 and Il-10 were even accorded the NATO codenames “Bark” and “Beast,” respectively.

While the Il-2 had seen its last battle, however, the Il-10 had not. North Korea received 93 Il-10s, which served in its 57th Assault Aviation Regiment. These played a major role in blasting South Korean troops in the opening weeks of the Korean War in 1950, but as U.S. air power entered the fray, more than 70 were shot down or destroyed on the ground, and the type was withdrawn from frontline operations.

The Chinese PLAAF, too, operated 254 Il-10s until 1972. These sank a Republic of China landing ship January 1955 during the Battle of Yijiangshan Islands, struck the garrison at Kinmen Island later that year and bombed Tibetan villages in 1958.

After World War II, Soviet aircraft designers focused on light, speedy fighter bombers for ground support. A true successor for the Sturmovik didn’t emerge until the late 1970s in the armored Su-25 Frogfoot attack plane, which continues to see extensive action around the world today.

Even the U.S. Air Force’s A-10 Warthog pays tribute to the Sturmovik’s design principles.

The Sturmovik’s mission as a low and slow ground pounder exposed its crews to extraordinary danger that no amount of armor plating could protect entirely against. But despite sustaining terrible losses, the Russian attack pilots gave desperately needed air support for the hard-pressed Red Army, enabling it to withstand and ultimately drive back the fascist onslaught.

This article by Sebastien Roblin originally appeared in 2017.