Russia Is Planning to Return Another Kirov-Class Battlecruiser to Duty 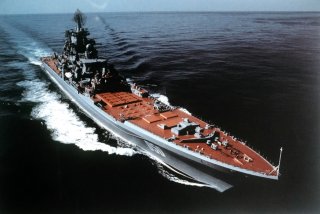 Here's What You Need to Know: The warship that became Admiral Nakhimov was commissioned in 1988 under the name Kalinin and—as with all the other Kirov cruisers—renamed in the early 1990’s following the Soviet collapse.

Russia’s behemoth Admiral Nakhimov cruiser is set to return to service after spending the past two decades in the shipyard.

“We can say that our work is proceeding on schedule… I believe that the cruiser will enter trials in 2023,” Deputy CEO of Russia’s United Shipbuilding Corporation for Military Shipbuilding Vladimir Korolyov told reporters earlier this week. Nakhimov was stowed in Russia’s Sevmash shipyard for repairs by 1999; however, work on the cruiser began in earnest only after 2013. Admiral Nakhimov was previously scheduled to begin trials in 2021 and rejoin the Navy in 2022, but that timeline was reportedly pushed back due to unspecified “problems with suppliers.”

Boasting a displacement of 28,000 tons under full load, the Kirov class is the largest and heaviest class of surface combatant ships in the world. Within Russia’s Navy, the Kirov cruisers come second only to the problem-ridden, 58,000-ton Admiral Kuznetsov aircraft carrier. Meant to serve alongside a planned but never-realized line of nuclear-powered Soviet aircraft carriers, The Kirov class was to herald a new age of global Soviet power projection.

The warship that became Admiral Nakhimov was commissioned in 1988 under the name Kalinin and—as with all the other Kirov cruisers—renamed in the early 1990’s following the Soviet collapse. The warship was armed to the teeth, in keeping with its main purpose of holding U.S strategic submarines and carrier strike groups at risk. Nakhimov carried as many as twenty P-700 Granit cruise missiles, ten torpedo tubes that likewise supported anti-submarine missiles, four anti-submarine rocket launchers from RBU family, the naval variant of the S-300 surface-to-air missile system, and six units of the Kashtan close-in weapon system.

The Vladimir Putin administration considered modernizing all four of the cruisers that the Russian Navy inherited from its Soviet predecessor, but eventually decided to sacrifice one-half of the Kirov fleet to free up the funds needed to save the other. Admiral Ushakov and Admiral Lazarev are scheduled to be scrapped in 2021, while Nakhimov and Petr Velikiy will be repaired and refitted. There are few details on the progress of the work being done on Nakhimov. Korolyov noted, without elaborating, that the engineers conducting the refit had to address numerous issues surrounding the cruiser’s power plant. He added that the Sevmash team is in the midst of revamping the ship’s missile launch systems.

Nakhimov is expected to be upgraded with a deeply revamped weapons arsenal as part of its ongoing modernization. It is widely believed that both Nakhimov and Petr Velikiy will receive Russia’s new 3M22 Tsirkon is a winged, anti-ship hypersonic cruise missile, as well as a naval variant of the S-400 missile defense system, P-800 Oniks supersonic anti-ship missiles, and Kalibr cruise missiles.

The full extent of Moscow’s deployment plans for Nakhimov are unclear, but the cruiser is projected to remain in the Northern Fleet after entering service. Both Admiral Nakhimov and Petr Velikiy are expected to serve well into the coming decades.