Is Russia Preparing for War Against Ukraine? 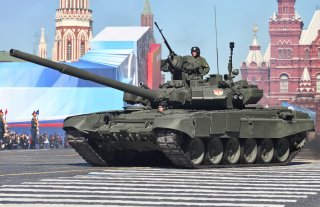 Here's What to Remember: The Biden administration is reportedly not entertaining a U.S. military response in the event of a Russian invasion of Ukraine.

As Russian troops continue to mass on Ukraine’s borders, Kiev and Washington sound the alarm over a potential invasion scenario.

A recent crop of U.S. intelligence assessments found that the Kremlin is massing troops and military hardware along Russia’s side of the Russian-Ukrainian border. New satellite imagery reportedly confirms the border presence of as many as fifty battlefield tactical groups, supported by tanks, artillery systems, and infantry fighting vehicles.

Ukrainian military intelligence estimates that there are currently 94,000 Russian troops at the border; U.S. intelligence sources put the number at around 70,000. According to intelligence documents obtained by The Washington Post, the number of troops at the border could swell to 175,000—equaling approximately 100 tactical battalions—in anticipation of a possible Russian invasion of Ukraine in early 2022. Though the full scope of Moscow’s plans remains unclear, there is widespread agreement among U.S. experts and officials that Russia’s westernmost forces are rapidly developing the capability to stage a large-scale military operation against Ukraine. “We don’t know whether President Putin has made the decision to invade Ukraine,’’ State Secretary Antony Blinken said. “We do know that he’s putting in place the capacity to do so on short order, should he so decide. So despite uncertainty about intention and timing, we must prepare for all contingencies while working to see to it that Russia reverses course.”

The Ukrainian military has substantially improved since the 2014 Euromaidan crisis and Moscow’s annexation of Crimea, but Russian forces still enjoy an overwhelming qualitative and quantitative advantage in most battlefield categories. From a sophisticated, echeloned network of advanced missile defenses to a sprawling air force and modernized heavy armor contingent, the Kremlin is positioned to deploy a wide range of threats to which Kiev has no effective response. U.S. officials and military experts previously warned that a Ukraine invasion scenario could involve not only Russia’s absorption of the pro-Russian separatist Donetsk and Lugansk People’s Republics, but a sweeping offensive to seize the country’s Black Sea coastline up to the strategic port city of Odessa.

The Biden administration is reportedly not entertaining a U.S. military response in the event of a Russian invasion of Ukraine. Washington is instead compiling what officials describe as its toughest sanctions package yet, including further restrictions on the sale of Russian bonds and measures aimed at cutting Russia off from the SWIFT global transaction system.