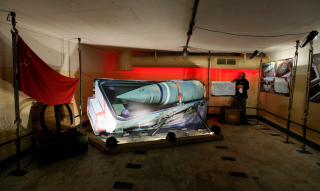 Here's What You Need To Remember: Modernizing America’s land-based nuclear deterrent offers a substantial chip of deterrence to play to get the Russians to decommission their tactical nuclear arsenal. The next administration must compel Russia to forswear the use of tactical nuclear weapons in a conventional future conflict.

“The Russian Federation reserves the right to use nuclear weapons in response to the use of nuclear and other types of weapons of mass destruction against it and/or its allies, as well as in the event of aggression against the Russian Federation with the use of conventional weapons when the very existence of the state is in jeopardy,” Vladimir Putin wrote in his June executive order on Russian nuclear doctrine.

This has U.S. officials worried that Russia would use such nuclear weapons in a conventional conflict to compensate for the inferiority of its conventional forces to their U.S. and NATO counterparts.

Former Soviet president Mikhail Gorbachev committed to the elimination of tactical nuclear weapons before the Soviet Union collapsed in 1991.

Nevertheless, Russia under Putin has balked at the idea of following through with their elimination and has been unwilling to include tactical nuclear weapons in the next START treaty.

Reducing the threat from Russian tactical or battlefield nuclear weapons to U.S. troops in the event of a war with Russia stands among the top of President Donald Trump’s priorities in the event he wins a second term. The president’s team unsuccessfully pressed hard against Russian negotiators to include tactical nuclear weapons in the next iteration of the Strategic Arms Reduction Treaty (START).

The current START treaty that Biden helped draft in 2010 expires in February. Putin isn’t Gorbachev. He’s a tough operator who only understands reciprocal pressure and force. He will pocket whatever concessions he is given.

Russia has modernized its tactical nuclear program, which is not covered under the START treaty, and the U.S. must modernize its land-based deterrent to increase pressure on the Russians to settle.

Russia deployed “short- and close-range ballistic missiles, ground-launched cruise missiles, including the 9M729 missile, which the U.S. Government determined violates the Intermediate-Range Nuclear Forces or INF Treaty, as well as anti-ship and anti-submarine missiles, torpedoes, and depth charges,” Lt. Gen. Robert P. Ashley, former director of the Defense Intelligence Agency, said during remarks at the Hudson Institute in Washington in May 2020.

In contrast, the United States only has a single non-strategic nuclear weapon: the B-61 gravity bomb.

The president’s opponents have cast him as a Russian tool, but the demand that Russia cast aside the use of battlefield nuclear weapons is an example of where he is tougher on Russia than the Obama-Biden administration was.

Should President Trump prevail in the election, his administration should press ahead with the modernization of U.S. nuclear weapons and with the Ground-Based Strategic Deterrent (GBSD) program to build the next generation of Intercontinental Ballistic Missiles (ICBM), which will replace the 50-year-old Minuteman III ICBMs. The administration’s budgetary request, as well as the current drafts of the House and Senate versions of the National Defense Authorization Act, all are agreed to give $1.524 billion to the program for the 2021 fiscal year. The U.S. Air Force expects the GBSD to cost $21.96 billion over the life of the program and is not expected to begin deployment until 2029.

Part of nuclear negotiating is keeping the Russians guessing where the threat is and where it’s coming from. The nation’s seaborne deterrent provides that because where its Submarine Launched Ballistic Missiles (SLBM) are is a closely guarded state secret. America’s land-based nuclear arsenal should provide similar uncertainty for the Russians.

Russia knows that in case of war it can pinpoint land-based missile silos via its spy satellites and then strike them. During the 1980s, the Reagan administration proposed using mobile railcars and mobile launchers to keep the Soviets guessing. However, the Cold War ended and President George Bush canceled the program in 1991 before the program’s slated 1993 rollout date.

President Reagan ramped up America’s land-based nuclear posture with the MX “Peacekeeper” missile program, the Pershing 2 and the Ground Launched Cruise Missile (GLCM) system.  The MX program created a “shell game” that kept the Russians guessing where the missiles were. The U.S. Air Force randomly moved the missiles between shelters in the deserts of Nevada and Utah to make it difficult to know where the actual missiles were and which one were dummies. Reagan viewed the MX as a key negotiation chip.

President Trump, or Joe Biden if he is elected, should revisit the Reagan administration’s proposal and make part of America’s land-based Intercontinental Ballistic Missile (ICBM) and short-range nuclear deterrent mobile.

It announced last year plans to revive the Reagan-era GLCM program, which was scrapped under the 1987 Intermediate-Range Nuclear Forces Treaty (INF), that would do just that. The Trump administration withdrew in August 2019 in the wake of Russian treaty violations.

Some of the missiles could be redeployed in Alaska to increase the pressure on the Russians due to the state’s proximity to the Russian Far East. They also can be deployed in the Baltics and Poland to counter the 9K720 Iskander short-range ballistic missiles based in Russia’s Kaliningrad region along the Baltic Sea.

Reagan showed at Reykjavik in 1986 that holding out combined with ratcheting up the pressure on an adversary can help produce a better deal. Sticking to his guns with Mikhail Gorbachev led to the signing of the INF in 1987 and paved the way to the original START Treaty in 1991.

Modernizing America’s land-based nuclear deterrent offers a substantial chip of deterrence to play to get the Russians to decommission their tactical nuclear arsenal. The next administration must compel Russia to forswear the use of tactical nuclear weapons in a conventional future conflict.

John Rossomando is a senior analyst for Defense Policy and served as Senior Analyst for Counterterrorism at The Investigative Project on Terrorism for eight years. His work has been featured in numerous publications such as The American Thinker, Daily Wire, Red Alert Politics, CNSNews.com, The Daily Caller, Human Events, Newsmax, The American Spectator, TownHall.com and Crisis Magazine. He also served as senior managing editor of The Bulletin, a 100,000-circulation daily newspaper in Philadelphia and received the Pennsylvania Associated Press Managing Editors first-place award in 2008 for his reporting. This article was originally published last month.