Russia Is Set to Acquire a New Fighter Jet 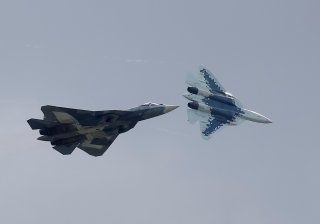 Here's What You Need to Remember: Rostec’s accompanying press statement was likewise quite vague, announcing the introduction of a “fundamentally new aircraft.”

Russian defense giant Rostec published a Youtube video  teasing a new fighter jet that is expected to be unveiled at the MAKS-2021 aviation exhibition. The trailer featured a blurry, long-distance shot of an aircraft, accompanied by B-roll footage of what appears to be —namely, the United Arab Emirates, India, Vietnam, and Argentina—reacting to the announcement. All four of these countries have been in talks with Russia or they are currently in talks with the country over prospective weapons sales, suggesting that the fighter will be marketed as an export product. The thirty-second trailer is saturated with chess references, centered around the black knight piece—that same chess piece is prominently featured on the splash page for the new fighter, which displays a countdown timer for the MAKS-2021 event. The messaging is cryptic but highly consistent: several days ago, the Twitter page of Russia’s United Aircraft Corporation (UAC) posted an edited photo of a giant black knight piece floating over a landscape, along with a caption that said, “Guys, everything is simpler than you think.” This could mean any number of things, though, perhaps the UAC is making a playful reference to the unclassified U.S. UFO report that was released in late June.

Rostec’s accompanying press statement was likewise quite vague, announcing the introduction of a “fundamentally new aircraft.”

“Russia is one of the few countries in the world with full-cycle capacities for producing advanced aircraft systems, as well as a recognized trendsetter in the creation of combat aircraft,” according to the press statement. “The new product developed by UAC specialists should arouse genuine interest not only in our country, but also in other regions of the world, including our competitors abroad.” Curiously, the press statement added that the plane’s “individual elements can already be seen” in its promotional, thirty-second Youtube clip. “The video also contains allusions to the key characteristics and unique properties of the project,” it continued. Perhaps the most obvious “allusion” from the video is that the new fighter will be offered as an export product. The chess motif is too vague to warrant a specific guess—at this stage, it could denote everything from a program name to how Rostec intends to outplay its foreign competitors in the fighter export market.

The state news outlet TASS interviewed Executive Director of Aviaport Aviation News Agency Oleg Panteleyev, who believes that the new fighter is intended to compete with Lockheed Martin’s fifth-generation F-35 Lightning II. "The teasers in English and the regions that the pilots presented in a video released by Rostec [state tech corporation] suggest that the domestic light fighter will be in competition with the US F-35 aircraft on foreign markets,” he said. “I am certain that the fighter’s demonstration at the MAKS-2021 will create a wow effect. It is not accidental that [Russia’s state arms exporter] Rosoboronexport has invited over 120 delegations from 65 countries of the world to the aerospace show.” While this is an intriguing prospect, geopolitics doesn’t leave much room for direct-market competition between American and Russian fighter jets. From NATO to the post-Soviet sphere, the import options of most governments are constrained by their foreign policy commitments. There are, however, a few big wildcards in the global export market. India is among the clearest examples, having signed major arms import contracts with both Moscow and Washington in recent years. Without explicitly citing any sources, TASS suggested that the aircraft could be a stealth-oriented strike platform with a large weapons payload and high thrust-to-weight ratio.