Russia Still Has 'Battleship's and No One is Talking About It 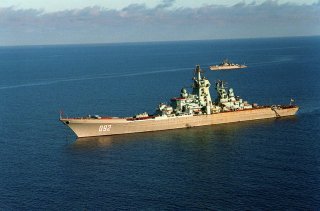 Key Point: Moscow built these warships during the Cold War and they live on today. Here's what the Kirovs can do.

In the 1970s, the Soviet Union embarked on a project to do what no navy had done for decades—build a surface warfare vessel comparable in size to the battleships of World War I and World War II. The U.S. Navy—and every other navy in the world—had given up on ships of this size due to expense and vulnerability. Why concentrate capabilities in a single ship which could quickly fall victim to missiles and torpedoes?The Soviets not only persisted in building the ships, but have kept them in service even after the Cold War ended. Originally intended to threaten the U.S. Navy’s most precious warships—aircraft carriers and ballistic missile submarines—the surviving ships now play a different role, showing the flag and ensuring that the world keeps Russian naval power in mind.

Currently, only Pyotr Velikiy, the last of the four ships, remains in active service. But unlike some of the white elephants of the Soviet period, the Russians have found a good use for her. The Russian Navy has used Pyotr Velikiy heavily, showing the flag around the world to demonstrate the continued  relevance of Russian seapower. She even conducted antipiracy operations for a time off Somalia, perhaps one of the greatest mismatches between mission and capability in recent memory.