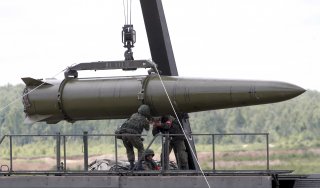 Here's What You Need To Remember: According to data from the trials, “Tsirkon successfully penetrated its target at a distance of 450 kilometers” and reached a travel speed of “over eight Mach” or roughly 9800.35 kilometers per hour.

Late last week, Russia’s Ministry of Defense posted a roughly twenty-second video of a Tsirkon test launch. “The Project 22350 lead frigate Admiral of the Fleet of the Soviet Union Gorshkov carried out the next test-launch of a Tsirkon hypersonic cruise missile from the White Sea against a complex target position in the Barents Sea,” read a Defense Ministry statement accompanying the video.

The launch was conducted in the Barents Sea, near the Arctic region. The video briefly showed the night-time launch of what is reportedly a Tsirkon missile flying into the sky. The test-launch site was cordoned off with help from Russia’s Northern Fleet, including the missile cruiser Marshal Ustinov and the Project 22350 frigate Admiral Kasatonov.

According to data from the trials, “Tsirkon successfully penetrated its target at a distance of 450 kilometers” and reached a travel speed of “over eight Mach” or roughly 9800.35 kilometers per hour. This is the latest of a long series of Tsirkon tests over the past several years—one of the most recent was notably held this year on Russian President Vladimir Putin’s October 7 birthday. The earliest trials were conducted from coastal platforms and allegedly from Tu-22M3 bombers, but Tsirkon’s subsequent launches were from surface vessels—in particular, the Admiral Flota Sovetskogo Soyuza Gorshkov (Admiral Gorshkov for short) frigate. Admiral Gorshkov is the lead ship of the Admiral Gorshkov class, a line of fifteen modernized Russian guided-missile frigates introduced in the mid 2000’s.

The 3M22 Tsirkon is a winged, anti-ship hypersonic cruise missile that emerged from a winding research and development stage to begin state trials in 2015. Initial reports identified Tsirkon as a submarine and surface ship-launched weapon; that still appears to be its primary role for the foreseeable future, but Putin announced in late 2019 that a land-based version is in the works. The design concept behind the missile is simple: Russia’s military hopes that Tsirkon’s sheer speed and likely ability to maneuver mid-flight will make it an exceedingly difficult target for enemy air defenses to intercept. In fact, Russian defense commentators have identified it as a particularly potent tactical weapon against North Atlantic Treaty Organization carrier strike groups.

Some of Tsirkon’s performance details have varied over the past years—Putin claimed in a 2019 State-of-the-Nation Address that the missile’s effective range will exceed 1,000 km, with other sources reporting that Tsirkon can reach as far as 2,000 km in certain settings. Widespread design similarities and broadly overlapping development timelines have invited the expert speculation that Tsirkon is possibly related to the Brahmos-II hypersonic cruise missile that is being jointly developed by Russia and India. The Tsirkon hypersonic cruise missile is being developed in compliance with Russia’s modernized universal seaborne fire complex (UKSK-M), a new launcher platform that will be made backwards-compatible with older Russian warships.

Although designed in large part for Russia’s upcoming modernized frigates, the Soviet Kirov-class battlecruisers Admiral Nakhimov and Petr Velikiy are reportedly first in line to field the Tsirkon missile. Other possible Tsirkon fittings include the Project 885 Yasen submarine class, according to TASS news.

Following this latest round of late-stage launch tests, Tsirkon is expected to enter service in the coming years.