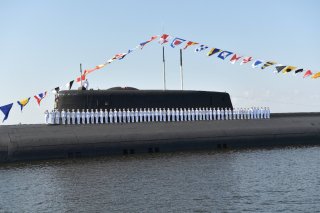 Russia is seeking major upgrades to its Pacific Fleet as military tensions build in the Indo-Pacific.

“Pursuant to our procurement plans, in the coming years, our command is going to be augmented with new nuclear-powered submarines that will help to considerably strengthen the naval component of Russia’s nuclear strategic force,” Chief of Staff of the Pacific Fleet’s Submarine Force Command Rear Admiral Arkady Navarsky said on Wednesday, according to Russian state-owned media enterprise TASS. “We’re looking forward to receiving four submarines, including two Borei-class and two Yasen-class ships. They are almost complete, with some already undergoing performance trials.”

Navarsky confirmed that the Pacific Fleet will receive two upgraded Borei-A nuclear-powered ballistic missile submarines (SSBNs) and two Yasen-class nuclear-powered cruise missile submarines in coming years. Navarsky did not name the specific submarine models slated for the Pacific Fleet. One of the Borei-class SSBNs is confirmed to be Imperator Aleksandr III, currently under construction and scheduled to be delivered to the Pacific Fleet in 2022. The second Borei submarine will be either Knyaz Oleg or Generalissimus Suvorov, with the other reportedly going to the Northern Fleet.

The Pacific Fleet’s two upcoming Yasen-class submarines are Novosibirsk and Krasnoyarsk, slated for delivery in late 2021 and 2022 respectively. The fleet is scheduled to receive a third Yasen-class submarine, Perm, by 2023. The Borei-class is the Russian Navy’s new flagship strategic submarine line, slated to replace the aging, Soviet-era Delta and Typhoon classes. Navarsky noted that the Pacific Fleet’s Borei-class vessels will be compatible with the new RSM-56 Bulava submarine-launched ballistic missile (SLBM), intended to replace the R-39 Rif solid-fueled SLBMs in Russia’s nuclear triad. The Yasen-M-class cruise missile submarines were introduced in the late 200s and intended to phase out the Russian Navy’s 1970s and 1980s attack submarines inherited from the Soviet Navy.

Moscow has taken a newfound interest in the Taiwan debate in recent weeks. Russian president Vladimir Putin urged his Chinese counterpart Xi Jinping not to consider the preemptive use of military force against the island.

“I think China does not need to use force. China is a huge powerful economy, and in terms of purchasing parity, China is the number one economy in the world ahead of the United States now,” Putin said earlier in October, according to CNBC. “By increasing this economic potential, China is capable of implementing its national objectives. I do not see any threats.”