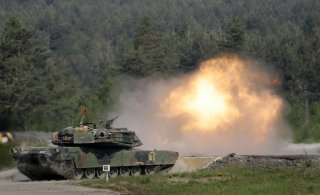 Here's What You Need to Remember: While Russia may finally have a 125-millimeter sabot round that can threaten Western main battle tanks at range, only its handful of new T-14s tank are capable of actually using it.  Optimistic claims that the 2A82 gun could be retrofitted to numerous older T-90s and T-72s so far appear not to have materialized.

Tanks employ a variety of different ammunition, including fragmenting high-explosive (HE) shells for combatting personnel and light vehicles, and high-explosive-anti-tank (HEAT) shells employing shaped charges that blast a jet of molten metal when they strike their target.  Because HEAT shells do operate based on kinetic energy, they do not lose power over distance. Russian tanks can also fire guided missiles through their gun tubes which use HEAT warheads. Though slower than a shell, missiles are more accurate against very distant targets.

Sébastien Roblin holds a master’s degree in conflict resolution from Georgetown University and served as a university instructor for the Peace Corps in China. He has also worked in education, editing, and refugee resettlement in France and the United States. He currently writes on security and military history for War Is Boring. This article first appeared earlier in 2019 and is being republished due to reader's interest.