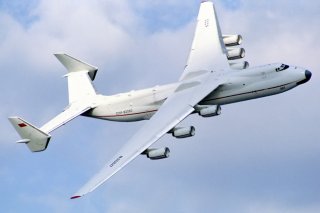 Key point: Today, these unique aircraft can be seen on display at Zhukovsky International Airport and the Ryazan Museum of Long-Range Aviation. They have also made a few appearances at air shows over the last two decades.

Space capabilities remained vital to the Soviet Union throughout the Cold War for maintaining its prestige as a peer superpower to the United States, and Moscow had ambitious plans to deploy the Buran space shuttle and Energia rocket in the 1980s.

But the factories responsible for producing the gigantic 7.75-meter diameter Energia rocket boosters necessary to sling spacecraft beyond the atmosphere were located Tushino and Kubyshev in Russia—while the Baikonur Cosmodrome launch facility was located hundreds of miles away in south-central Kazakhstan.

The boosters were too large for existing cargo aircraft, and yet too sensitive to be subject to the vibrations produced by a lengthy transit by truck or rail. And building the hundreds of miles of highway necessary for a few delivery runs to Kazakhstan would have proven costly indeed.

So in 1976, the space flight program put out the requirement for an air transport solution for its giant rockets, even if it had to be specially built from scratch. A test attempting using two or three hulking Mi-26 heavy transport helicopters had to be ditched—literally—when the pilots were forced to drop the rocket booster as it began swinging in a pendulum-like fashion.

The Antonov design bureau, renowned for its transports, began work on the gigantic An-225 Mriya (“Dream”) to do the job.  Today, the unique An-225 remains the heaviest aircraft ever built, and the one with the largest wingspan in service.

But there was a problem with the An-225—it was based on the An-124 Condor heavy transport, which itself hadn’t yet completed development. That meant the An-225 wasn’t going to be finished anytime soon.

So the program then turned to the Myasishchev design bureau, best known for producing the giant M-4 four-engine strategic jet bomber. Myasishchev proposed to quickly convert one of its big M-4’s to carry huge cargoes on its back.

Three 3MN-2 model M-4s designed to serve as aerial refueling tankers were selected for conversion to the ultra-heavy cargo role with the designation 3M-T, though in the end one of them was only used for static testing. After designer Vladimir Myasishchev passed away in 1978, the 3M-T was renamed the VM-T in honor.

But placing such a huge weight on the middle of an airplane’s fuselage would be unbalanced, so a design team developed a new tail with twin vertical stabilizers. While such configuration wasn’t that uncommon in past designs, the 3M-T’s vertical tail fins had to be many times larger than usual to deal with the vortices produced by the large cargoes that were to be slung on its back.

Indeed, the entire M-4 had to be completely restructured and strengthened to accommodate such a huge weight. That meant removing bomb bay doors and weapon turrets, stretching out the aircraft seven meters longer, bending the rear-fuselage upwards, and installing higher-thrust Dobrynin VD-7MD turbojets. A revised flight control system and re-weighted fuel-supply mechanism were also necessary, and fourteen attachments points installed to secure four different types of cargo.  This Russian-language article delves further into the aerodynamic adjustments.

The so-modified Atlant made its first flight on April 29, 1981, and was tested bearing a full payload nine months later. In addition to lugging rocket booster’s with twice the diameter of the Atlant, the VM-T could carry gigantic cargo pods the size of a house, resulting in the nickname “The Flying Barrel.” The 1GT pod carried an Energia’s hydrogen tank and nose and tail fairings; the 2GT pod contained the oxygen tanks and engine compartments; and the 3GT configuration a tail and nose fairings from both.

The two operational Atlants were dedicated to two projects. The first involved ferrying Energia booster components from Bezmyanka 780 miles to the southeast to Baikonur for use in the failed launch of the laser-armed Polyus orbital weapons platform in May 1987.

The second involved piggybacking the Soviet Buran space shuttle, as well as hefting the Energia boosters it also relied upon.

Two huge cranes were used to lower Buran on the VM-T’s back, as you can see here. The 62-ton shuttle was stripped of instruments, reducing weight to only 45 tons, and taken up for its first spin atop a VM-T in 1983.  An early flight nearly ended in disaster as the Atlant’s electrical systems all shut down during the landing run—fortunately after the landing gears were extended, but leaving flaps fixed in place. And then one of its turbojets burnt out!  Fortunately, the crew managed to pull off a high-speed landing without the flaps deployed.

Finally, the Buran was delivered to Baikonur and made its only orbital (and completely unmanned) flight on November 15, 1988, which you can see here.

Altogether, VM-Ts flew 150 missions transporting parts for the Soviet space flight program before the An-225 was finally completed and assumed its place.

An Antonov engineer derided the Atlant as an “amateur” effort, but there’s little doubt the VM-T was an inventive solution to a tricky logistical problem.

Today, these unique aircraft can be seen on display at Zhukovsky International Airport and the Ryazan Museum of Long-Range Aviation. They have also made a few appearances at air shows over the last two decades.