The Russian Army Is Powerful, But America’s Infantry Has One Advantage 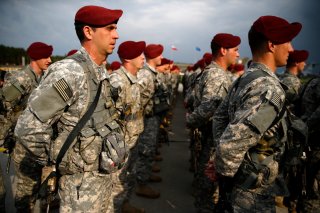 The United States and Russia field two of the most powerful armies in the world. Heavily mechanized and salted with combat veterans, the U.S. Army and Russian Ground Forces have spent the better part of the last fifteen years not only chasing guerrillas from Afghanistan to Syria, but also fighting conventional-style wars in Iraq and Georgia. Now, as tensions between the NATO and Russia place U.S. and Russian ground-pounders in the same country (Syria) or just across the border from one another (the Baltics), the question is: in a head-to-head matchup, which side would prevail?

The backbone of U.S. Army infantry is the infantry squad. In light infantry—including air assault, airborne and mountain units—a squad consists of nine soldiers that further divide into a squad leader and two fire teams. Each fire team of four soldiers consists of a fire team leader, rifleman, grenadier, and an automatic rifleman equipped with two M4 carbines, an M4 carbine equipped with the M320 under barrel grenade launcher and the M249 squad automatic weapon. Individual soldiers will carry single-shot AT-4 light antitank weapons as issued.