Is the Russian Bumerang Better Than the Stryker? 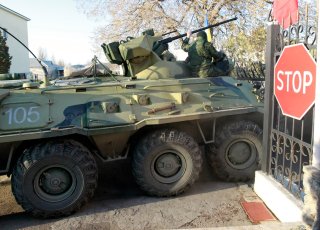 The Bumerang is the latest standardized wheeled armored platform for multiservice forces to be developed by the Russian Military-Industrial Company (MIC). The modular amphibious wheeled infantry fighter vehicle (IFV) and armored personnel carrier (APC) has a crew of three, including the driver, gunner, and commander, and can carry upwards of eight passengers.

It was first seen in public during the rehearsals for the 2015 Moscow Victory Day Parade but was delayed due to design issues, which required modifications to the main body including the crew compartment, as well as to improve the vehicle's buoyancy. However, it appears that the issues have been resolved and the Bumerang has been seen as an improvement over Soviet-era APCs.

Unlike with the BTR line of vehicles, which had the engine located at the rear of the vehicle and meant that the crew had to exit via side doors, the new APC's engine is located at the front. It thus features a wide rear hatch for easier egress from the vehicle, while it offers enhanced armor to provide greater protection to the crew.

The Bumerang also features a remotely operated turret — the same one used in the Armata T-15 heavy IFV — and it is equipped with either a 30mm main gun and anti-tank missiles, or a larger 57mm autocannon and medium machine gun, depending on the configuration.

Much like the United States military's Stryker wheeled vehicles, the Russian IFV/APC could serve in a variety of roles, including anti-aircraft air defense, mobile gun anti-tank, and even reconnaissance. As an amphibious vehicle, the Bumerang could negotiate and overcome water obstacles using two waterjets

The Bumerang is just one of the many new pieces of military hardware that Moscow will be presenting at the arms show, which is Belarus's largest defense show.

"At the MILEX 2021 arms show, Russian defense enterprises will feature more than twenty models, which Rosoboronexport has offered to the world market over the past year. In addition to the reconnaissance/strike version of the Orion drone, they include the Antey-4000 anti-aircraft missile system, the upgraded 203 mm Malka self-propelled gun, a versatile armored engineering vehicle, an armored personnel carrier, and an infantry fighting vehicle based on the Bumerang platform," Rosoboronexport CEO Alexander Mikheyev said in a release to TASS.

This will be the first time the Russian military hardware is presented at MILEX.

"Rosoboronexport is able with its unique status to synchronize the supply of weapons and special equipment with training both at industrial enterprises and using the Russian Ministry of Defense's capabilities to provide other services in this area, while optimizing various, including logistics, costs," Mikheyev added.