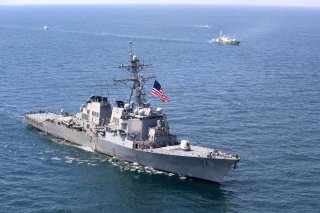 Here's What You Need to Remember: Unfortunately, this is not a new hazard for the destroyer’s crew. Years ago, Su-24s made similar mock strikes on Donald Cook as she sailed in international waters in the Black Sea.

For two days in April 2016, Russian fighter-bombers and helicopters buzzed an American destroyer in the Baltic Sea, according to the top U.S. military command in Europe. These incidents are just the latest in a series of provocative moves by Moscow’s aircraft near American and European forces in international waters and airspace.

You can see the video here.

“We have deep concerns about the unsafe and unprofessional Russian flight maneuvers,” U.S. European Command said in a statement. “These actions have the potential to unnecessarily escalate tensions between countries, and could result in a miscalculation or accident that could cause serious injury or death.”

The Pentagon sent out a number of photographs and videos showing the incidents. The images give a sense of just how quickly the situation could have turned into a disaster.

Sailing in international waters, the ship does not appear to have changed its course to avoid the incoming planes and choppers. The planes flew so close, the Donald Cook had to stop flying its own SH-60 Seahawk.

“The Russian aircraft flew in a simulated attack profile and failed to respond to repeated safety advisories in both English and Russian,” the statement added, referring specifically to the second incident. “USS Donald Cook’s commanding officer deemed several of these maneuvers as unsafe and unprofessional.”

Unfortunately, this is not a new hazard for the destroyer’s crew. Years ago, Su-24s made similar mock strikes on Donald Cook as she sailed in international waters in the Black Sea.

Then, as in 2016, the Pentagon protested the Russian maneuvers. In any case, the harassment appears to be in response to Washington’s continued criticism and sanctioning of Moscow over Russia’s interventions in Ukraine and Syria.

The Kremlin’s warplanes have zipped around American and NATO aircraft, too. In July 2014, a U.S. Air Force RC-135 flew into Swedish airspace to avoid Russian fighter jets. In April 2015, an Su-27 Flanker nearly slammed into another one of these airliner-sized spy planes over the Baltic.

In Europe, “Russia continues to foment security concerns in multiple locations,” the Pentagon’s main headquarters for the continent noted in its 2016 posture statement. “It is now clear Russia does not share common security objectives with the West.”

Since invading and annexing Ukraine’s Crimea region in February 2014, Moscow has released similarly charged rhetoric. With neither side looking to back down, mock attacks and extremely close and fast fly-bys have become routine.