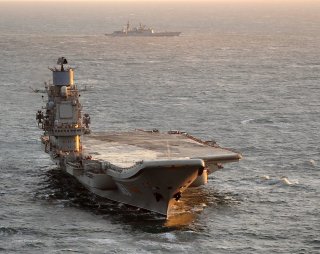 Here's What You Need to Remember: Kuznetsov will remain Russia’s sole carrier for the foreseeable future—the Project 23000E Storm is a delusion that will likely never make it off the drawing board.

Under the stewardship of Adm. Sergey Gorshkov, the Soviet Union built a fleet that could challenge the might of even the United States Navy during the Cold War. But one area where the Soviet Navy never caught up to the United States was in the realm of naval aviation, despite the plans put forth by Gorshkov and his successor Adm. Vladimir Chernavin.

The Soviet Union only completed one true aircraft carrier—Admiral Kuznetsov—before the massive state came apart at the end of 1991. With the collapse of the Soviet Union, the Kremlin’s ambitions to build a carrier fleet and the naval aviation assets to go with it largely came to a grinding halt as chaos enveloped the newly independent Russian Federation. The new—and much truncated—Russian Federation did not have the financial or economic wherewithal of the Soviet Union, but the Kremlin chose to preserve its hard-won naval aviation capacity for the future.

Russia divested itself of its four Kiev-class "heavy aviation cruisers" that were designed to operate the Yakovlev Yak-38 Forger and later the Yak-41 vertical takeoff and landing strike fighters immediately after the disintegration of the Soviet Union. Two of the massive hybrid cruiser/carriers were sold to China as museum ships—providing Beijing with significant expertise in carrier design. Meanwhile, Novorossiysk—the third vessel—was scrapped in South Korea while the last ship Admiral Gorshkov was eventually rebuilt as a true flattop carrier for India and now serves as INS Vikramaditya.

Foregoing its VTOL carriers, the Russian Federation chose to preserve its naval aviation capability in the form of Admiral Kuznetsov and the Sukhoi Su-33K Flanker-D navalized air superiority fighter. However, that was the Kremlin’s entire goal—preservation of Russia’s naval aviation capacity. A newly independent Ukraine quickly sold off Kuznetsov’s sister ship Varyag—now serving Beijing as Liaoning—to China along with an early Su-33 (T-10K) prototype and scraped the next-generation Ulyanovsk on the ways. Thus, left with a single mechanically unreliable carrier and a handful of navalized Flanker variants, Russia does not have much more than a training and flag-waving capability in terms of naval aviation. But if the Kremlin’s finances improve very significantly, Russia retains the capability within its forces to absorb a new carrier.

Admiral Kuznetsov—with its ski-jump ramp—was always intended as a stop-gap measure for the Soviet Union before it moved on to the much larger and much more capable catapult-equipped Ulyanovsk design. The Soviets recognized that the Kuznetsov design was too small and its ski-jump launch system was too limiting in terms of aircraft payload. Nor could the ship effectively support a full range of aircraft such as the Yakovlev Yak-44 airborne early warning aircraft—though apparently, the twin-turboprop could just barely make it off Kuznetsov’s ski-jump. As such, given the Kremlin’s precarious financial state during the 1990s, Russia canceled the development of most of its naval aviation aircraft during the early 1990s.

The Su-33K—initially developed as the Su-27K—was among the few survivors, but it was a relatively simple modification of the existing land-based Su-27 Flanker-B.  As might be expected, the Su-33 incorporates a strengthened airframe, reinforced landing gear, and a naval arrestor hook. The jet also incorporated a modified wing that offers roughly 12 percent more area—when all the modified flaps and slats are extended—which is necessary for carrier operations. It also incorporates a canard and shortened tail-boom. The Su-33 also incorporated aerial refueling capability.

In recent years, the Su-33K has received new Saturn AF-31F engines and the SVP-24 bombsight—designed to improve free-fall bomb accuracy—but little in the way of other improved avionics. It is possible that the Russians will keep the aging airframe in service for some more years, but it seems that Moscow is leaning towards reequipping its carrier-based naval aviation force—or at the very least heavily supplementing—with the newly revived Mikoyan MiG-29KR Fulcrum.

The reasons for this are that there were only about 35 Su-33 aircraft were ever completed. Moreover, the Su-33K is a large aircraft—bigger than a Grumman F-14 Tomcat—and Admiral Kuznetsov is not a large aircraft carrier at a standard displacement of about 55,000 tons. The ship can only handle about a dozen Su-33K aircraft on board, especially because the vessel is further limited in the carrier role because of its heavy under-deck missile armament of 12 massive P-700 Granit anti-ship cruise missiles. By contrast, the ship can handle at least 20 MiG-29KR, which are not only smaller but much more versatile.

With 20 MiG-29KR fighters onboard, Kuznetsov—despite her many limitations—might prove to be a more useful platform for the Kremlin. The new MiG-29KR—developed from the MiG-29M—is equipped with a new radar and other modern sensors. Moreover, the new navalized Fulcrum not only has a fairly potent air-to-air capability with its R-77-1 and R-73/R-74 missiles, but it also has precision-guided strike capability with its KAB-500 guided bombs and the X-35 anti-ship missiles.

Kuznetsov will remain Russia’s sole carrier for the foreseeable future—the Project 23000E Storm is a delusion that will likely never make it off the drawing board. The best thing for Russia to do to maximize Kuznetsov’s utility—such as it is—is to replace the Su-33 with the MiG-29KR as soon as possible. Kuznetsov will never be a good carrier, but it won’t be completely useless with the MiG-29KR however—just mostly useless.