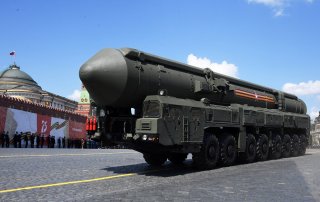 Here's What You Need to Remember: The Kedr system is the latest milestone in the Kremlin’s far-reaching program to procure a modernized ICBM force. The Kremlin aims to completely replace the Topol, a 1980s Soviet ICBM that occupied the foundation of Russia’s mobile ICBM forces in the years following the Soviet collapse, with its Topol-M successor by the early 2020s.

Kedr is a solid-fueled ICBM system that, like its Yars predecessor, will come in both mobile and silo-based variants. Road-mobile ICBM systems enjoy several advantages over their silo counterparts; in particular, they are harder to locate, track, target, and destroy, making them potentially more survivable.