Russian S-400 Missile System Deployments are Heating Up the Arctic 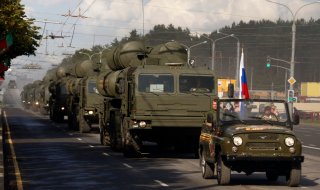 Here's What You Need to Remember: As the ice continues to melt at a faster pace, opening up new waterways for maritime transit and segmenting new areas of ice and land, Russia has sought to expand its territorial boundaries in the Arctic beyond the continental shelf northward from the boundaries specified in the United Nations Convention Law of the Sea.

Russia is adding more S-400 air defense systems to the Arctic in what can be seen as an overt effort to greatly “upgun” and further militarize its already sizable and growing Arctic footprint.

Certainly the arrival of more S-400s in the highly contested and increasingly tense Arctic changes the tactical circumstances in which U.S. and allied aircraft can conduct operations, and it might not be a coincidence that these advanced Russian air-defenses are arriving shortly after Washington sent B-1 bombers to Norway for stepped up Arctic patrols.

The Russian addition of more S-400s is cited in the U.S. Army’s newly released strategy document called “Regaining Arctic Dominance,” a text which specifies a number of pressing U.S. high-priority operations in the Arctic.

“Moscow announced it will increase the number of S-400 air and missile defense units deployed across its Arctic territory, which tracks with its deployment of more sophisticated equipment to defend its air and maritime domains,” the strategy states. “These systems create a ‘protective dome’ across Russia’s vast Arctic coastline and improve its overall operational ability to detect and track vessels and aircraft. These systems give Russia almost complete coverage of its northern coastline and adjacent waters.”

Clearly, unless preceded by stealth bombers, or flanked by fifth-generation aircraft, a B-1 or B-52 bomber would quite possibly be put at risk by an S-400.

All of this may be precisely why the U.S. Air Force is now in the process of preparing for integrated Arctic Patrols with a combined force of B-2 bombers and F-35 stealth fighters to patrol the Arctic on coordinated missions together. It makes sense that America would increase stealth capacity to counter increased Russian air-defenses as Russia has been aggressively increasing its Arctic presence.

“Beginning in 2010, Russia invested over $1 billion to refurbish 13 airfields, enhance search and rescue capabilities, and upgrade radar stations to improve awareness in the air and maritime domains, including Sopka-2 radar systems on Wrangel Island (300 miles from Alaska) and Cape Schmidt,” the Army strategy writes.

By extension, the added air-defense power, according to the U.S. Army strategy, adds a new dimension to Russia’s existing air-defense apparatus.

As the ice continues to melt at a faster pace, opening up new waterways for maritime transit and segmenting new areas of ice and land, Russia has sought to expand its territorial boundaries in the Arctic beyond the continental shelf northward from the boundaries specified in the United Nations Convention Law of the Sea. “Russia’s claim now covers 463,000 squard miles of sea shelf in the Arctic,” the Army Arctic strategy says.