This Russian Sniper Rifle Can Kill From Long-Range (But Is It Now Obsolete?) 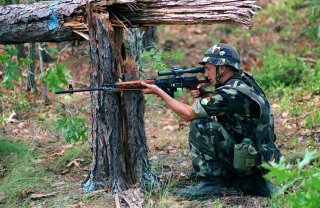 Here's What You Need To Remember: The simplicity of the Dragunov means it is likely to stick around the battlefields of the world for much longer, even as Russian forces adopt western-style sniper rifles for more precise roles. Kalashnikov Concern has put out a ton of updated variants of the SVD that can mount Picatinny optics and other accessories.

The Dragunov sniper rifle paired with the PSO-1 scope was perhaps the most advanced sniper system in the world when it entered service in 1963. But in the years since, the design has fallen far behind and Russia has not procured a domestic replacement.

Nowadays, Russia’s elite security services and military snipers prefer Western sniper rifles while the Russian arms industry catches up. But how did the Dragunov fall behind? Does it have a future in service?

The sniper rifle during most of the Cold War was a neglected weapon, with development being driven by conflict. For the West, the majority of sniper rifles in the 1960s were WWII vintage, being scoped variants of the M1 Garand, M1903 Springfield, or other World War-era bolt action rifles.

Some innovation happened on the fringes. The Swiss developed the ZfK-55 in the 1950s, probably the best sniper rifle of the early Cold War with its straight pull bolt and accurate action.

In the late 1950s, the Soviets were still using the scoped variants of the M1891/30 Mosin rifle. Their short and medium-range infantry arms were already updated with AK and SKS rifles. Only a new long-range individual weapon was needed.

The Soviet Army had experimented with semi-automatic sniper rifles with scoped variants of the SVT-40 during WWII, but these were found to have too much dispersion. Now they were ready to try again.

A team led by a leading sporting rifles designer, Yevgeny Dragunov, was commissioned to begin design work on a new sniper rifle in 1957. The team finished the design in 1962 and it won the trials against a competing rifle from Konstantinov and was adopted in 1963.

The resulting Dragunov rifle (also known as the SVD) was a fairly impressive design. It utilized a short-stroke piston system to minimize moving mass, compared to the long-stroke AK. It also featured a last round bolt hold for faster reloads.

Perhaps more impressive was the PSO-1 optic attached to the rifle. Feature packed for its era, it featured an illuminated reticle, two turrets that allowed for windage and elevation adjustment (calibrated in set increments out to 1 km), 4x magnification, and a reticle with a stadiametric rangefinder.

However, its most impressive feature was an infrared filter. The filter was designed to counter first-generation night vision devices like the M3 Carbine which used infrared spotlights to find their targets. Enabling the infrared filter on the PSO-1 allows the sniper to spot these “invisible lights” in the dark so their users can be eliminated.

Put together, the package was pretty advanced for the era. One early issue was a lack of match-grade 7.62x54R ammunition, but this was rectified with the adoption of the 7N1 sniper cartridge in 1967.

But things began to change in the middle of the 1960s. The United States began updating its stock of sniper rifles, prompted by its experiences in Vietnam. The first was the U.S. Army’s XM21 sniper rifle, an evolution of the M14, which incorporated a variable zoom 3-9x automatic rangefinding scope. The Marines adopted a variant of a commercial hunting rifle, the M40.

The Germans also made a Dragunov equivalent with the G3/SG1, an adaptation of their G3 service rifle for snipers that featured a similarly adjustable 1.5-6x scope in the mid to late 1960s.

These rifles allowed the West to get an equivalent capability to the Dragunov, albeit they had their own quirks. The XM21 required a lot of tuning to get accurate, and if the rifle was not handled carefully that tuning could be thrown off.

The Dragunov only really became obsolete with the next generation of sniper rifles in the 1980s and 1990s.

At that era, companies like Accuracy International used updated manufacturing methods and materials to produce incredibly precise rifles that were also very durable. Rifles like the Accuracy International Arctic Warfare and M24 SWS, both adopted in the 1980s in the west, outclass the Dragunov in the accuracy department by a significant margin.

The M24 and other western rifles at that time were also equipped with much more powerful scopes (10x for the M24 SWS) to take advantage of the increased accuracy and to enhance the observational capabilities of the sniper.

Meanwhile, the Dragunov only got a slight upgrade in the 1970s with a changed barrel twist rate for a new bullet. A new 3-9x variable-zoom sight called the PSP-1 (1P21) was considered for addition to the Dragunov in 1989 but was only adopted in limited numbers, if at all.

The situation for the Dragunov didn’t improve after the fall of the Soviet Union. A couple variants for special purposes were made, the SVDS which added a folding stock for paratroopers, the SVU, a bullpup version, and the SVDK, a special version in 9.3mm meant to penetrate body armor.

Experiments were also done with enhanced sights such as the 1P59 “Hyperion,” though the standard issue sight for the SVD is still a version of the PSO, the PSO-1M2, which removes the infrared filter due to obsolescence.

But why has Russia hesitated to modernize the Dragunov? A large part is due to doctrine.

The sniper in Russian doctrine has always been “lower level” asset, meant to take out tactical targets of opportunity and extend the reach of a squad. In contrast, western snipers tend to operate more independently with a focus on reconnaissance and taking out operationally important targets.

After the dissolution of the Soviet Union, Russian forces had an increased need of the “Western” style of sniping and thus procured western rifles to undertake such tasks.

They didn’t modernize the Dragunov because it wasn’t meant for that. The Dragunov was designed to be simple to use and more rugged than western rifles. It even can mount a bayonet for use in close combat.

Having a rugged fixed 4x zoom sight is preferable to having a complex higher zoom one in such a role. Western marksman rifles are often issued with a fixed zoom 4x or 6x optic, opposed to a proper 10x or variable zoom sniper optic.

The simplicity of the Dragunov means it is likely to stick around the battlefields of the world for much longer, even as Russian forces adopt western-style sniper rifles for more precise roles. Kalashnikov Concern has put out a ton of updated variants of the SVD that can mount Picatinny optics and other accessories.