Russia's "Ampulomet" Mortar Was as Weird as it Looked 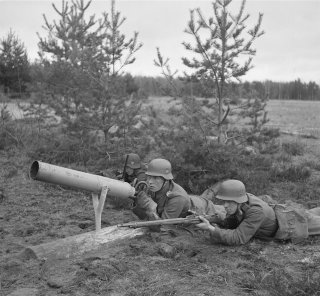 As German troops invaded the Soviet Union in June 1941, the Red Army scrambled to arm itself with anti-tank weapons. One system the Soviets hurriedly developed was the Ampulomet, a mortar that launched a glass projectile filled with an incendiary mix.

The Ampulomet, named for the Greek ampoule, or “sealed glass capsule,” was little more than a 125-millimeter mortar tube, loaded from the muzzle and mounted on a Y-shape pedestal on a sled or tripod.

The Ampulomet is certainly one of World War II’s weirdest anti-tank weapons. It was similar to the British Blacker Bombard and Northover Projector.

The weapon weighed approximately 44 pounds and required a three-person crew. Introduced in 1941, it reportedly saw action during the Soviet Union’s Continuation War against Finland as well as against invading German forces.

The 125-millimeter-diameter glass spheres projected from the Ampulomet by way of a shotgun cartridge charge. Sources differ on what exactly was inside the ampules. Some suggest jellied gasoline or a napalm-like substance, while others suggest thermite or a mixture of phosphorus or sulphur.

The idea was for the projectile to strike a tank and shatter, spreading its contents over the vehicle, penetrating the vision slots, hatches and engine grills to disable the vehicle or its crew.

Sources also differ on its maximum range, with some suggesting 400 yards and others claiming a slightly more realistic 250 meters. With a reported rate of fire of up to eight rounds per minute, the Ampulomet could lay down an impressive barrage. Its accuracy is questionable, as the Ampulomet featured a simple, folding, graduated rear sight.

One Russian account from late 1942 suggested that Ampulomets “burned up five dug-outs, four pillboxes and up to 40 enemy soldiers.”

The Ampulomets left the Soviet arsenal in late 1942 or early 1943. In their place the Red Army deployed anti-tank grenades, Molotov cocktails, anti-tank guns and anti-tank rifles such as the PTRD-41 and PTRS-41.

This story originally appeared at Historical Firearms, and then at War is Boring.