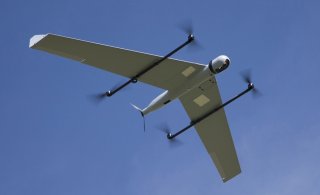 Here's What to Remember: Having a mini drone organically tied to ground units could potentially bring significant advantages to Arctic warfare, simply given the terrain.

Russia is now operating hand-held military drones able to function in temperatures as extreme as minus 52 degrees Celsius, a technology that introduces new operational combat options for fast-increasing numbers of Russian forces in the Arctic.

The drone, according to a report in Russia’s TASS news agency, can fly in both the Arctic and Antarctica. Called the ZALA 421-08M, the five-pound drone is hand-launched and able to fly for an hour and half and transmit data at ranges up to 30m using thermal imaging and EO/IR video cameras.

“The drone’s fixed design, lightweight and smart control system allow for its operation by the personnel with the minimum training level,” the TASS report says.

Having a mini drone organically tied to ground units could potentially bring significant advantages to Arctic warfare, simply given the terrain. A hand-launched drone could transmit video images back from the opposite side of a glacier, mountain or other kinds of extreme cold-weather terrain. While snowstorms or inclement weather might obscure any kind of EO/IR signal, however thermal imagers in that kind of environment might be well-positioned to detect heat signatures from enemy forces, vehicles, or ships seeking to remain undetected.

The ZALA might be able to launch from a ship or Arctic vessel of some kind with great impact, given that water, ice and mountain-like glacier structures are often in close proximity to one another. The greatest advantage something like a ZALA might offer could be described in terms of man-vehicle interface. If the drone can operate in extreme temperatures less amenable to ground infantry in any way, soldiers could remain warmer inside a vehicle to sustain operations. The Arctic landscape, by extension, may not lend itself to dismounted operations involving infantry moving away from or outside of armored vehicles. While the military services are making strides with efforts to engineer cold-weather capable platforms such as fighter jets, ships, weapons and armored vehicles, the Arctic environment does not necessarily allow for armored ground advances with surrounding infantry.

The underlying significance of this Russian report on Arctic drones may simply be that it adds new elements to Russia’s well-documented military build-up in the region which includes the addition of land facilities as well as icebreakers, air and naval assets, and a visible uptick in operations in the region.

ZALA Aero is a leading Russian developer and manufacturer of unmanned aerial vehicles and mobile systems. The company has been part of the Kalashnikov Group since January 2015, TASS report.