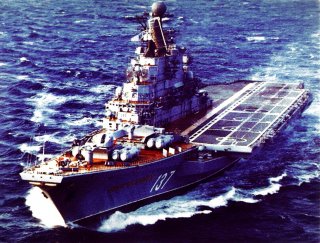 Here's What You Need To Remember: The Kiev-class carriers were an ambitious attempt to give Russia a powerful ship capable of taking on American aircraft carriers while at the same time hunting down submarines that posed a threat to the Soviet homeland. Because responsibilities were split between two vastly different, their ability to do either was severely curtailed.

Kyle Mizokami is a defense and national-security writer based in San Francisco who has appeared in the Diplomat, Foreign Policy, War is Boring and the Daily Beast. In 2009 he cofounded the defense and security blog Japan Security Watch. You can follow him on Twitter: @KyleMizokami. (This first appeared in 2017.)