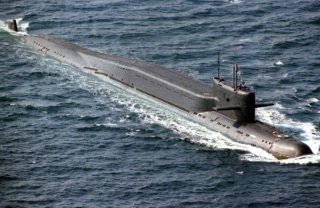 Here's What You Need to Remember: Of the forty-three Delta-class boats that were built through 1992, seven belonged to the Delta IV line—all of them were transferred to the Northern Fleet in the years prior to the Soviet collapse.

The project 667B Murena, better known in the west by its NATO reporting name Delta I, took root in the early 1960’s with a Soviet attempt to procure a new SSBN class capable of threatening critical North American infrastructure while deploying outside of the U.S. Sound Surveillance System (SOSUS) used to detect and track Soviet submarines. As the backbone of the Soviet SSBN roster, Delta submarines became vital to the emergent Soviet “bastion” strategy of deploying SSBN’s in friendly waters, secured on all sides by destroyers and missile cruisers.

The Delta class became a decades-long, iterative project composed of four distinct model lines, with each successive wave of design tweaks building on the last. There is a fairly consistent sense of performance progression, especially in the armament and weapons targeting departments, from Delta I to Delta IV. The latter boasted a somewhat similar hull design and performance layout to the prior Delta III, which itself was markedly larger than its Delta I and II predecessors to accommodate a raft of new targeting and navigation features. As with the Delta III, the Delta IV supports a maximum submerged speed of up to 24 knots. Though hardly a leading design priority, some minor steps were taken to reduce the Delta IV’s noise levels— these included a specially-applied acoustic coating, attempts to isolate certain noisy components, and revised five-bladed propellers.

The Delta IV is primarily armed with sixteen R-29RMU “Sineva” missiles, the latest evolutionary step within the prolific family of Soviet R-29 submarine-launched ballistic missiles (SLBM’s). Consisting of four warheads and boasting a maximum operational range of around 8,300 km, the RMU Sineva registers a significant performance leap over the original mid 1970’s R-29. Delta IV is also compatible with a much wider range of weapons compared to its Delta III counterpart, including four 533mm torpedo tubes as well as the Novator SS-N-15 Starfish anti-ship missile.

Of the forty-three Delta-class boats that were built through 1992, seven belonged to the Delta IV line—all of them were transferred to the Northern Fleet in the years prior to the Soviet collapse. All models from the obsolescent Delta I and II lines were retired. As of late 2020, only one out fourteen Delta III units remains in service. The Delta IV line has fared much better. Six are currently active in regular service duty; the seventh, BS-64, was refitted in the mid-2010’s as a “special purpose” submarine. As previously noted by The National Interest, the BS-64 is believed to be a carrier and support vessel for Russian unmanned underwater vehicles, as well as a host for certain mini submarines, including the ill-fated AS-12 Losharik.

The Russian Navy has no further plans for the long-term modernization of its remaining Delta submarines. As of 2013, the Navy has begun the process of replacing its aging Delta and Typhoon SSBN’s with the new Borei line of strategic submarines.