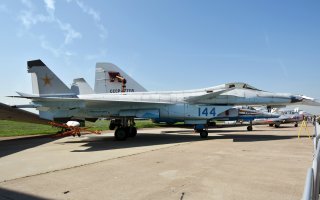 Here's What You Need to Know: The fighter came nine years too late.

The Soviet Union’s MiG 1.44 was a well-known and visible effort to respond to or answer the U.S. F-22 Raptor, however, the project was quickly canceled after its first flight in 2000 for reasons which may still seem somewhat unclear, to say the least.

While several reports cited engineering problems associated with the Mikoyan Project 1.44s first flight, its rapid cancelation may have had more to do with another clearly apparent deficiency--it simply does not look very stealthy.

Any aircraft likely to achieve a level of success against advanced air defenses, and especially against an F-22, would have needed a highly effective stealth configuration. Of course, many design details related to stealthy coating materials, avionics, heat emissions or internally-buried engines may not be fully available, however, even a cursory look at its external configuration reveals a “not-so-stealthy” airframe.

MiG 1.44 aircraft is reported to have arrived as many as nine years late, meaning its initial designs were envisioned years prior to its construction or flight, yet there seems to be little reason why it even at that time could not have been somewhat stealthier.

The entire aircraft appears to have been built with sharp edges, protruding structures and angular shape, raising questions about just how stealthy it was intended to be. It looks like it has weapons pylons or small structures under the wings, some of which at the very least impairs the smoothness of the plane's exterior. An F-22, by contrast, shows what looks like a purely internal weapons bay, something naturally considered imperative for stealth.

Its air duct inlets are beneath the fuselage and square-like with sharply angled edges and the top of its fuselage reveals two vertical structures almost perpendicular to the body. The MiG 1.44 simply does not have much of a blended wing-body configuration, something which unquestionably decreases its stealth properties. The top of the cockpit glass area is also much less gradually sloped than most stealth fighter jets, and its heat-emission exhaust appears almost entirely external.

Radar return “pings” bounce off aircraft, of course generating a return rendering of some kind able to transmit signals from different angles. A horizontal configuration naturally produces a much smaller margin of difference when it comes to helping radar operators discern some kind of identifiable shape, thereby decreasing detectability. Should there be multiple returns from multiple angles, a margin-of-difference can readily be detected, offering recognizable shapes to air defense controllers.

A B-2 is almost entirely horizontal, as it is not built with tail wings for maneuvering given its primary function as a high-altitude bomber, a key reason why it is reported to appear like a small bird or “insect” to enemy radar. At very least, the stealthy configuration of a B-2, and some stealthy Russian fighters such as the Su-35 or Su-57 fighter-bomber, clearly show shapes likely to generate a much smaller radar return than a MiG 1.44.  A Su-35, for example, has some shape similarities with the F-22. Unlike a B-2 bomber, most stealth fighters are not designed to be completely invisible per se, just much less detectable, trackable and targetable than non-stealthy planes.