Russia's MiG-29: Why This Old Fighter Just Won't Go Away 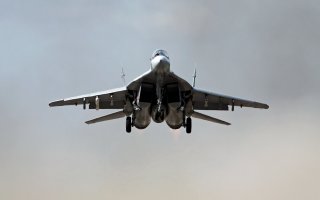 Here's What You Need to Know: Upgrades continue on the aging MiG-29 fighter.

The Mikoyan MiG-29 Fulcrum was developed during the late Cold War and entered service with the Soviet Union’s Air Force in July 1982, and despite the age the aircraft has remained in service throughout the world. It has been reported to be the fifth most common combat aircraft in the world. Continually updated, the MiG-29 will likely remain in service for at decades to come.

The latest batch could soon be flying over the deserts of North Africa. While the Algerian Air Force had acquired twenty-six of the original version of twin-engine fighter aircraft in 2014, it had had ordered fourteen of the MiG-29M/M2s just a year ago.

Russia’s state arms seller Rosoboronexport, which is part of the state hi-tech corporation Rostec, signed two contracts with Algeria on the delivery of a squadron of MiG-29M/MiG-29M2 fighters and a squadron of Su-30MKA aircraft at the MAKS-2019 international air show near Moscow last year.

The first batch of those modernized MiG-29s has reportedly been delivered to the North African nation. According to Tass, the fighters were delivered disassembled and are now being prepared for their first flights at the Oran airbase. Those fighters will also replace the aging MiG-29S aircraft that are currently operational with the Algerian Air Force’s 193rd Fighter Squadron.

Fourth-Generation Plus Plus Aircraft

The MiG-29M/MiG29M2 aircraft that have headed to Algeria are reported to be the same as the variant used by the Egyptian Air Force. While this aircraft shares many of the features of its predecessor, the MiG-29M began its development at the Mikoyan Design Bureau in the Soviet Union in the mid-1980s, it was designated as the MiG-33 in the 1990s. This was likely to suggest that it was a new unified family of aircraft rather than the latest variant of the MiG-29 fighter family.

The MiG-29M is the single seat version of the modernized aircraft, while the MiG-29M2 is the two seater. These variants introduced a new lightweight frame to increase maneuverability, while also drastically increasing combat range to 2,000 kilometers (km), from the 1,500 km of the original MiG-29.

The MiG-29M’s upgrade path could be seen to be fully realized with the upcoming MiG-35, a deeply modernized multi-role fighter that advances the MiG-29M formula with fifth-generation avionics and a proprietary Zhuk-AE active electronically scanned array (AESA) radar. Yet, as previously noted, the MiG-29M will not become obsolete with the imminent release of the MiG-35, just as first-generation MiG-29 models were not rendered obsolete by the MiG-29M.

However, the question must be asked whether Algeria is making the right choice to buy even the updated version of the aging aircraft especially after news reports circulated last month that a MiG-29 flown by Russian Contractors for the Libya National Army (LNA) was shot down by rival forces in the ongoing Libyan Civil War.